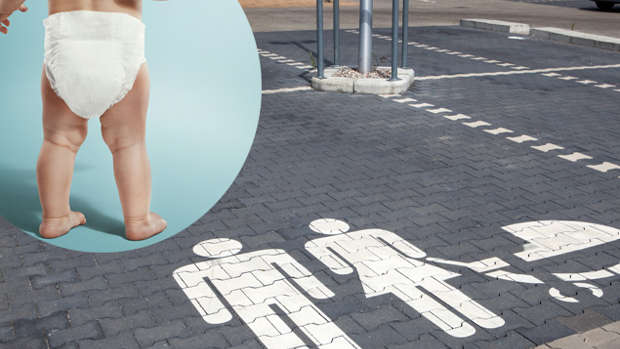 Most of the world understand why car parks have parent spots, it shouldn't be that hard to understand that a parent has to get their pram unfolded and their children safely into the building.

However, a small group of people think they can take advantage of these parks, instead of letting them be used by those who need them.

A mother of twins was exhausted after a busy day she was in need for nothing else to go wrong. This happened when a boy racer car cut her off and pulled into the last parent park in the carpark.

Thinking the man who stepped out of the vehicle might have been a tiny bit ignorant, she reminded them those spaces are reserved for people with young kids. After expressing his lack of interest in the situation, the mum said: "It it's really tricky to get a space, sort a baby out, let alone two and get a double trolley, especially when it's about to rain." He told her that it 'wasn't his problem', and when she explained that there were now no more parent spaces left - he became abusive.

The mum then wrote: "I tried to keep calm and replied: 'I hope you have kids and experience really really difficult day and a knob like you fucks you over one day'.

She claims the man then came back with: "Oh f*** off and burn your bra somewhere else," as he 'waddled away into the store waving his middle finger'.

She continued her post with: "My Chavy Cardiff inner-self exploded and I shouted across the car park ... you know In that classy kind of way: 'You f***ing ignorant twat!'.

The story took a turn from bad to ugly as she noticed he luck had worsened.

"As I turned to the boys in the car there was an overwhelming smell. My heart sank. Then I decided to get even. I used my bad nappy for good. A little justice for all knackered parents who have been fucked over with similar twatty McTwat faces' abusing these parking spaces and have had similar experiences.

"I felt instantly better! I'm just sorry I didn't have the time to hang round to see his reaction. I did receive affirmation from another woman who must have witnessed the incident. 'Thats genius,' as she walked off with a smile.

"Pour me a massive double!"

Her Facebook post has seen reactions for over 30k people, with many backing up her choices and even more saying they wish she'd smeared the mess all over his car.

Moral of the story: don't park in a parent spot if you AREN'T a parent.