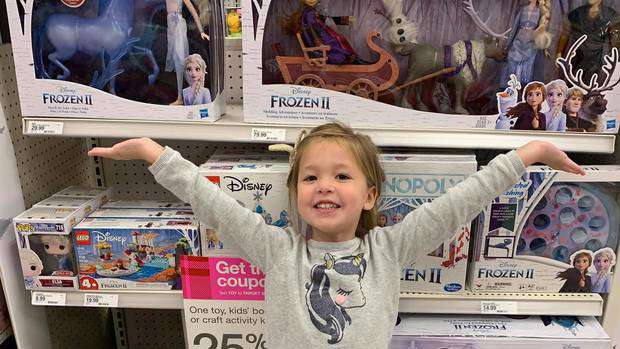 A mum's genius Christmas hack to stop her kids from having a tantrum while shopping has gone viral.

Kristina Watts, from Washington, United States, shared on Facebook how she prevents her daughter, Emerson, from crying her lungs out in public over toys.

"Once again my camera roll is full of pictures of Emerson with every single thing she wants for Christmas," she wrote.

"Why ... because it's the most amazing parenting hack ever and has stopped many meltdowns! If you aren't using this hack ... listen up, friends."

The mother goes on to explain how her previous trips to the store during Christmas time used to be very painful because of her children's behaviour.

"Toys are out in full force ... and of course my kids WANT IT ALL," she wrote.

"Obviously, I would love to have sweet, well-mannered, non-greedy, chill kids, that don't ask for all the things ... but I don't. So drop your judgement Karen, and stop reading if you have kids like that.

"Now ... if you have kids like mine ... that want the shiny amazing things that fill Target, the grocery store, Office Depot, the gas station, and pretty much everywhere you go this time of year, this is for you."

Watts said that it's as simple as taking a picture.

"Pause for a second, comment on the thing they're pointing out, and say, Let's take a picture with it and send it to Santa so he knows you want it!'

"Note: you can send it to Santa, grandma, TeeTee Stephanie or whoever it is you can pawn it off on. Totally up to you and can be different every time.

"Magically, Emmie smiles, says cheese, asks to see the picture, then PUTS THE TOY DOWN AND WALKS AWAY.

"It's magical. No tears. No tantrums (by either of us). And she forgets about all of them within minutes."

After sharing the tip she added "You're welcome" at the end.

Other mums quickly praised the brilliant post, which has been shared more than 51,000 times, with over 29,000 reactions and 15,000 comments.

"I love this idea, thank you for sharing!", one parent wrote.

"Genius and I admire your honesty!" another person said.

One added: "Thanks, this is exactly what we did Saturday at Target" along with a photo of her daughter posing with a toy unicorn.