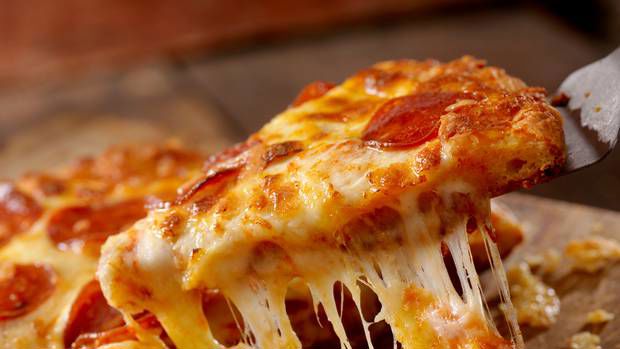 However you slice it, there's nothing quite like a piping hot pizza - and despite the endless exciting flavour combos at our fingertips, it turns out Kiwis prefer to keep it simple.

And we can absolutely promise you that Bill English's controversial spaghetti pizza, has also not topped the charts.

According to Domino's, it's the humble pepperoni that has taken out the top spot as the most popular pizza flavour in New Zealand.

The traditional tomato sauce, cheese and salty pepperoni combo may be one of the most classic flavour combos of them all, but it's still the go-to for many of us.

In fact, Domino's stores alone deliver over 10,000 pepperoni pizzas to Kiwis every day.

That means we eat our way through a staggering 275 metric tonnes of pepperoni every year - or 5,288kg a week.

"Domino's has introduced a variety of flavoursome pizzas to the menu over the years, but
nothing has ever come close to outshining this universally adored classic," he says.

"The Covid-19 pandemic has restricted many joys we once took for granted, but we count ourselves lucky that we can still enjoy our favourite slice.

"Even during various alert level restrictions, we've seen the power a Pepperoni pizza has to bring people together – whether it's shared between household members or enjoyed virtually over a video call with friends."

And the flavour has proved popular with vegans too - yes you heard correct. Vegan and vegetarian pizza lovers got a slice of the action last year when Domino's introduced a plant-based pepperoni pizza to its menu.