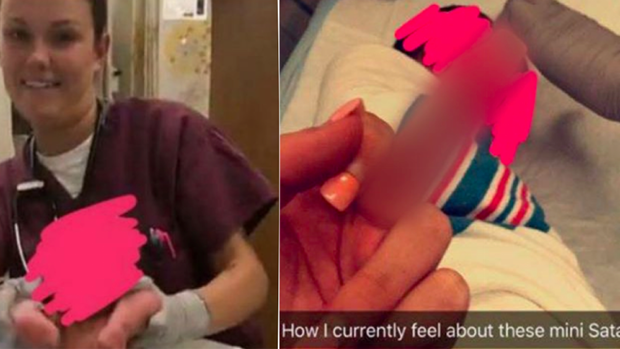 Two Naval nurses have been removed from duty after images of them messing around with newborn babies emerged online.

Images originally uploaded to Snapchat but later shared on Facebook by concerned recipients shows one of the women flipping off a baby with the caption "How I currently feel about these mini Satans." A second photo shows another nurse holding a baby by the arms and is taken from a video in which she makes the child 'dance' to 50 Cent song In Da Club.

In the video the nurse can be seen laughing and joking with someone behind the camera who can be heard saying "we're going to hell", the MailOnline reported.

The woman can then be seen holding the child, reported to be just hours old by Fox 30, under each arm.

As the song plays she moves the newborn's arms around to the beat, imitating rap musicians in music videos.

Pictures of the incident were shared hundreds of thousands of times after being posted online, and were quickly brought to the attention of hospital authorities.

A statement from the hospital's commanding officer was uploaded to Facebook on Monday night.

It says: "We are aware of a video / photo posted online. It's outrageous, unacceptable, incredibly unprofessional, and cannot be tolerated.

"We have identified the staff members involved. They have been removed from patient care and they will be handled by the legal system and military justice.

"We're in the process of notifying the patient's parents."

The images caused an outpouring of rage on social media, with the nurses branded 'cruel' and 'disgusting'.

Jane Agerton, who identified herself as a nurse from Tennessee, wrote: "They need to have their nursing license revoked. I am totally disgusted. How juvenile. Grow up."

Joy Allen added: "As a former Navy daughter, Navy wife and mother of a child born at NAS JAX I am sicken by this behaviour.

"I am sure that if I caught someone doing that to my child...your a** would have been grass under the lawn mower. Shame!"