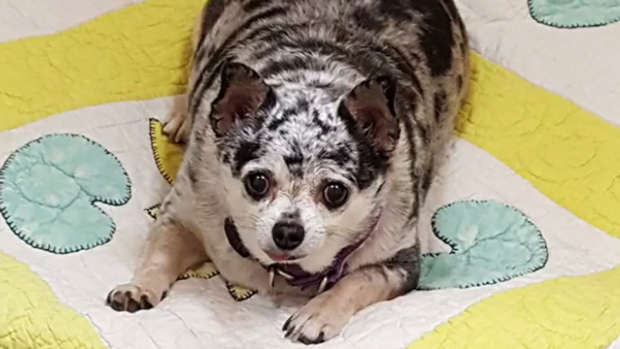 An adorable dog put on so much weight that her owner cruelly abandoned her.

However, it was a happy ending for Lu-Seal the chihuahua, from Pittsburgh, after she was adopted and returned to health when her new owner put her on a strict diet.

Lu-Seal, nine, was classified as morbidly obese at 16 pounds - double the healthy weight - and abandoned by her owner, reports the Daily Mail.

But after being put on a strict diet, she has since managed to lose over six pounds in eight months.

When the dog, who resembled a seal at her biggest weight, was adopted by her new mother, Julia Morley, she was barely able to walk.

Sampling the traditional cuisine of West Virginia: the pepperoni roll 😋

The dog had arthritis, as well as torn CCL ligaments in both knees, meaning her back legs were painful and she was unstable on her feet.

Little Lu-Seal now has her own Instagram page, which boasts over 800 followers and her new owner regularly updates her followers with the chihuahua's progress.

I'm at a little bit of a weight loss plateau... only down 0.02 pounds, which is like 0.5 human pounds. Mom says it might be because grandma fed me a lot of illegal snacks when I was at her house last weekend. It's ok, though, I'm still healthier every day 😁😁 #weightlossplateau #fitnessjourney #weightlosstransformation #dogonadiet

Owner Julia has written about Lu-Seal's weightloss mission for Pet Insider and says a vet can determine how much your dog should be eating based on their weight, age and activity level.

Lu-Seal's vet said she should be consuming 250 calories, which meant Julia could feed her 200 calories in regular food and spare 50 calories for treats.

This is to remind mom's friends not to feed me! I still convinced one at the last party I went to to give me a whole buttermilk biscuit, though 😇#shhdonttellmom

The chihuahua, who was eight pounds overweight to begin with, could only walk a few feet at a time but can now manage to walk a whole mile.

Having used a fitness tracker to keep abreast of her progress, Julia says Lu-Seal has gone from being in the bottom 20 per cent of her breed to an average chihuahua.

This leash won't stop my #zoomies

She says lots of obese dogs have joint pain, which prevents them from getting much exercise and her pet chihuahua is now on medication to help her deal with the pain and inflammation from arthritis.

Julia writes: "Weightloss in dogs, just like in humans, takes time. Your dog should only lose 1-2 per cent of his or her body weight each week.

"Check in with your vet regularly to make sure that your dog isn't losing weight too fast or too slow and to adjust their calorie intake as needed to go at the right pace.