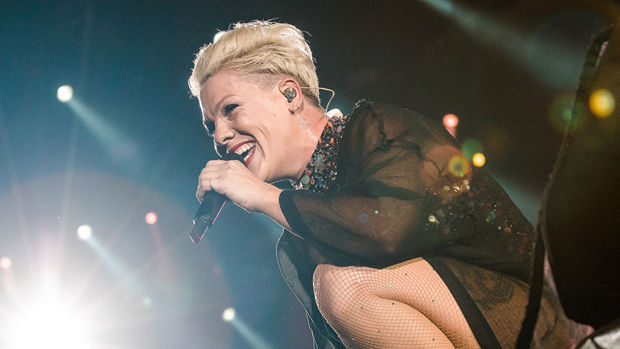 Pink has offered to pay the fines of a Norwegian female handball team who protested having to wear bikini bottoms.

The What About Us hitmaker has slammed the "sexist rules" and insisted she'd be more than happy to pay the $221 CAD fine The Norwegian Women’s Beach Handball team is facing for wanting to wear shorts.

The current rules state that players cannot cover up "more than 10cm on any sides" on the bottom.

However, the men's team can wear shorts.

I’m VERY proud of the Norwegian female beach handball team FOR PROTESTING THE VERY SEXIST RULES ABOUT THEIR “uniform”. The European handball federation SHOULD BE FINED FOR SEXISM. Good on ya, ladies. I’ll be happy to pay your fines for you. Keep it up.

Sending her support for the women, the 41-year-old pop megastar tweeted: "I’m VERY proud of the Norwegian female beach handball team FOR PROTESTING THE VERY SEXIST RULES ABOUT THEIR “uniform”. The European handball federation SHOULD BE FINED FOR SEXISM. Good on ya, ladies. I’ll be happy to pay your fines for you. Keep it up. (sic)"

The European Handball Federation's President, Michael Wiederer, later issued a statement promising to change the rules so everyone can feel comfortable playing the sport "regardless of gender".

He said: "I can confirm that the EHF will do all it can to ensure that a change of athlete uniform regulations can be implemented.

"Significant efforts will be made in order to further promote the sport in the best way possible for everyone, regardless of gender."

Meanwhile, Pink has previously spoken out about sexism within the music industry and how "unfair" it was when she was pitted against other female artists.

Here are the rules for the men’s vs. women’s uniforms. Ridiculously pic.twitter.com/8wDXG22sTd

When the Just Give Me A Reason hitmaker started her career, she was labelled to be "anti" Britney Spears and Christina Aguilera, despite being a huge fan of the two stars.

She said: "It was so unfair to all the girls. None of us wanted that, I love Britney - she used to carry around my album. I was like, 'Dude, I’m a street punk, I just skateboard. That doesn’t have to be the anti-Britney. I don’t want to fight anybody.' I think we navigated through it as good as a 20-year-old girl can. Now I think it’s totally different. Girls supporting girls is rad - I love to watch it."