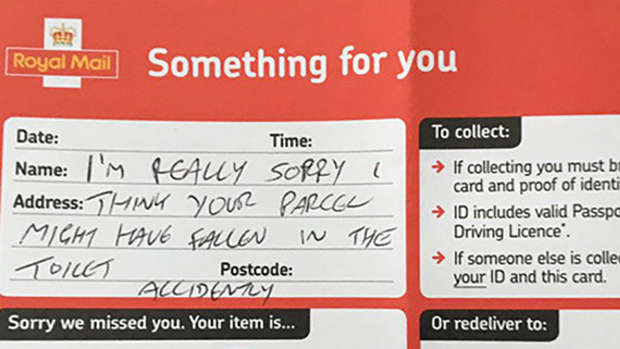 With no shortage of local stories where posties have left "attempted delivery" notices without actually attempting anything, a story has come out of the UK that may have us thankful that our mail carrier didn't try this hard to deliver our precious package.

Posting to Twitter, Manchester's Sam Cooke was on the receiving end of what could well be the most persistent delivery ever attempted by a Royal Mail carrier.

Aiming to ensure safe the arrival of the parcel, the postie looked around the flat to find an open window. He found one in the toilet, but when he deposited the parcel through the opening, it landed in the worst place possible.

Well this has happened today... pic.twitter.com/p1tPfGobif

With such a small gap to squeeze the package through, the postie could only cross his fingers and hope the box would land safely. Alas, luck was not on his side that day. The parcel made it into the house just fine. Photo / Twitter. But, it fell into the wrong 'receiver'. Photo / Twitter. What were the odds? Pretty high, evidently. Photo / Twitter.

While one could argue that the embarrassing outcome could've been avoided if the toilet lid had been shut, the postie was nice enough to leave a note, explaining what had happened.

Cooke mentioned later that the postie was coming over to apologise in person, but there were no hard feelings.

I look forward to meeting him and I will assure him he has nothing to be sorry about, no harm done! Keep up the great work @RoyalMail