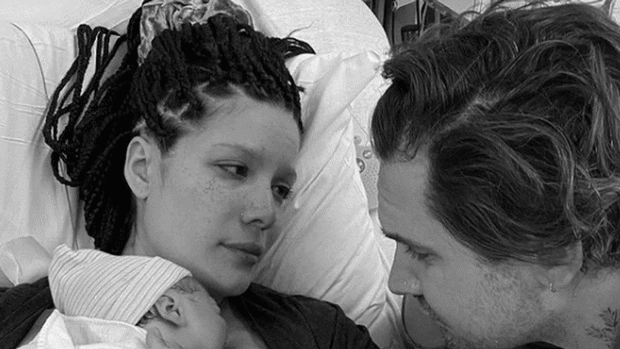 Halsey has given birth to their first child.

The 26-year-old singer took to Instagram to share a picture of themselves with their boyfriend Alev Aydin and newborn baby, whom they welcomed into the world on July 14.

Halsey did not reveal the sex of their baby, but the couple has named the tot Ender Ridley Aydin.

The You Should Be Sad hitmaker wrote alongside their post: "Gratitude. For the most "rare" and euphoric birth. Powered by love.

Halsey tagged their partner in the picture, and Alev shared his own sweet post on Instagram to celebrate the arrival of their baby.

Ender’s arrival comes as the Without Me singer is gearing up to release their new LP, If I Can’t Have Love, I Want Power, which is a concept record about "the horrors and joys of pregnancy and childbirth".

Halsey posed with their nipple on display for the album's cover, and later explained the move was a bid to help stop the "social stigma around bodies and breastfeeding".

They said: "This album is a concept album about the joys and horrors of pregnancy and childbirth. It was very important to me that the cover art conveyed the sentiment of my journey over the past few months.

"The dichotomy of the Madonna and the Whore. The idea that me as a sexual being and my body as a vessel and gift to my child are two concepts that can co-exist peacefully and powerfully."

And Halsey said they are "reclaiming" their "autonomy" after years of feeling like their body was owned by "the world in many different ways".

They added: "My body has belonged to the world in many different ways the past few years, and this image is my means of reclaiming my autonomy and establishing my pride and strength as a life force for my human being.

"This cover image celebrates pregnant and postpartum bodies as something beautiful, to be admired. We have a long way to go with eradicating the social stigma around bodies & breastfeeding. I hope this can be a step in the right direction!"