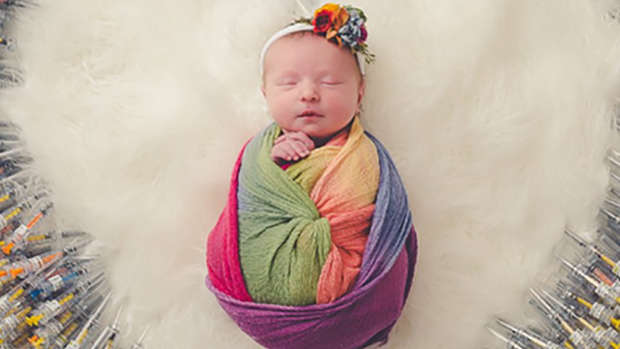 At first glance, this picture looks like just another beautiful newborn baby photoshoot.

But it is so much more than that.

The photo - which was taken by Samantha Packer of Packer Family Photography in Arizona in 2018 and recently resurfaced - serves as a reminder of just how much determination and love goes into the creation of a little person.

That is what it took for Patricia and Kimberly O'Neill to complete their journey into parenthood.

After baby London was born, the couple wanted to honour all the physical struggles they had endured along the way.

So they took a photo of the swaddled infant surrounded by a heart of every single needle they used — and the image has since gone viral.

The thousands of needles represent the blood-thinner injections Patricia used twice a day, as well as the IVF injections she took in her efforts to have a baby.

"This is the first time I have been asked to do a photo like this! I was honored and wanted to create something special!," Packer wrote alongside the photo on Facebook.

Speaking about the image, the mums said they wanted the photo to "give others hope and perseverance to push forward."

Patricia also wants London to use the photo as a reminder to always keep trying.

"Hopefully she’ll learn that you never give up on a goal that you have, and that even when you have no hope, hold onto it because there’s a light at the end of the tunnel, and you can get there," she shared.

"Each one of those shots were worth it to get our little girl. We cannot wait to get this printed and hung up. We know many couples face infertility yet it’s not talked about very often. Infertility is evil however my wife and I believe in the power of prayer which got us thru the last four years," she wrote.

"We love that our image can bring hope to so many in similar situations," Kimberly added.

"It's a rough journey, but hope and faith are the only things that can bring you through it"

The couple - who met six years ago at a daycare where they both worked and later married in 2017 - decided to try for a baby a year into their relationship.

But when they began trying to conceive, they had no idea the journey would be quite so long.

"We thought it was going to be pretty easy," said Kimberly. "We thought we would just go to a doctor and pick out some sperm and be parents in nine months."

In February 2013, they tried Intrauterine Insemination (IUI), a process in which donor sperm was placed inside Patricia's uterus, on their doctor's recommendation.

But it didn't work.

So the couple switched doctors and began IVF.

After suffering two miscarriages, one at six weeks and one at eight weeks, the doctors discovered Patricia had a blood clotting disorder.

One month later she was pregnant with a baby boy. But sadly, it ended in more heartache with another miscarriage.

At that point, Patricia says, she was ready to give up. However, the couple decided to give it one more try.

And soon followed their miracle baby, London, who they welcomed via a C-section.

"When we heard her cry, we both looked at each other and started crying," Patricia recalls.

"I was shaking and crying so hard. It was an overwhelming feeling of relief. She’s here. It was a lot of emotions for us all at once. It’s still unreal to me that we finally have our baby. We actually made it here."

The picture has since been shared more than 70,000 times.