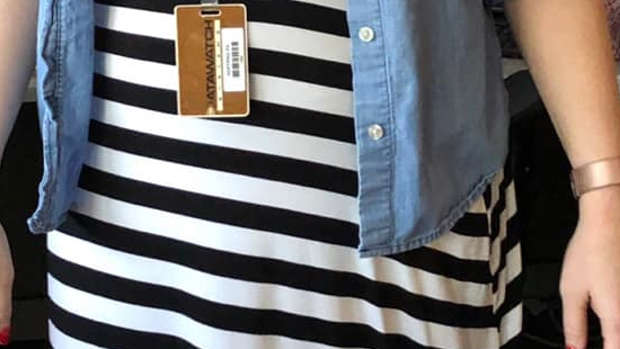 One mum-to-be had us in fits of laughter this week after she shared her hilarious wardrobe mishap on social media.

Lori Farrell - who is expecting a baby girl - was excited to wear a cute black and white striped skirt to work that was gifted to her by a friend ... except it wasn’t actually a skirt.

Taking to Facebook to share her hysterical story, Farrell posted a side-by-side comparison of her wearing the skirt next to a photo of the product from the website where it's sold.

"If you feel like a failure today, just know that I wore a car seat cover a friend gave me because I thought it was a skirt," she wrote alongside the image, adding a string of laughing emojis.

Since going viral, Farrell explained a friend had given her a bag full of secondhand "baby stuff she was getting rid of".

"I came home with a car full that day of enough baby clothes to cover our little girl’s first three months. She also gave me a pregnancy pillow, a rock and play, toys, shoes, baby carriers, etc. So when I pulled out the striped thing, I wasn’t really sure what it was."

"I thought the gathered sides were ‘ruching’ and that it was a maternity skirt ― except I thought the tag was oddly placed in the front," she said.

"I turned the skirt around to hide the tag and headed to work."

"Then when I got to work I was laughing with a coworker about it and decided to google the brand and realised they did not in fact even sell clothing."

Farrell's 'skirt' was actually the 'Mom Boss 4-in-1 Multi-Use Cover,' which parents can use as a cover for car seats and shopping carts, as well as a nursing cover.

Yeah, that's totally something we would do!

It looked super stylish and cute.