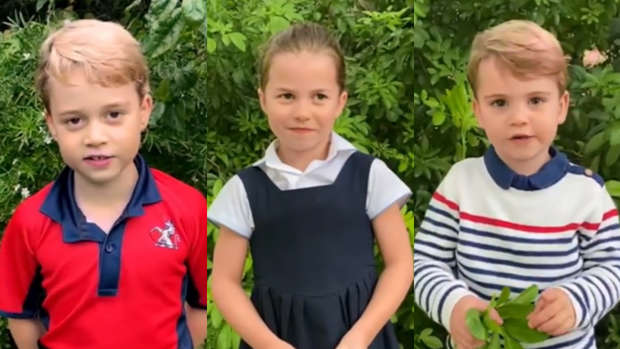 In a sweet new post on the official Kensingtonroyal Instagram account, Prince George, Princess Charlotte, and Prince Louis appeared in a rare video to ask some important animal questions of Sir David Attenborough.

The seven-year-old future king was up first asking, "What animal do you think will become extinct next?"

To which Attenborough replied:  "Well let's hope there won't be any. Because there are lots of things we can do when animals are in danger of extinction. We can protect them.”

We've got some questions for you, @DavidAttenborough...🌍🕷️🐒

Meanwhile, five-year-old Princess Charlotte revealed her love for spiders, asking: "I like spiders, do you like spiders too?"

"I love spiders, I'm so glad you like them!" the documentarian replied.

"I think they're wonderful things," he added, asking the young princess, "Have you ever watched one trying to build its web? That's extraordinary."

Finally, Prince Louis, who is just two years old asked, "What animal do you like?"

"I think I like monkeys best,” Attenborough answered. “Because they're such fun. They can jump all over the place... And they're so funny. And I like them a lot."

The video marks one of the first times the public has gotten to hear the voices of the young royals, and well, they are just so cute!

This comes after Attenborough visited the royals, and gifted Prince George a 23 million-year-old giant shark tooth.

The Duke and Duchess of Cambridge are delighted to share new photographs of their family with @DavidAttenborough. The photographs were taken earlier this week in the gardens of Kensington Palace, after The Duke and Sir David attended an outdoor screening of Sir David’s upcoming feature film 🎞️ ‘David Attenborough: A Life On Our Planet’. With a shared passion for protecting the natural world, they continue to support one another in their missions to tackle some of the biggest environmental challenges our planet faces. This includes working together on The @EarthshotPrize 🌍 the most prestigious global environment prize in history – further details of which will be shared in the coming weeks. When they met, Sir David gave Prince George a tooth from a giant shark 🦷 the scientific name of which is carcharocles megalodon (‘big tooth’). Sir David found the tooth on a family holiday to Malta in the late 1960s, embedded in the island’s soft yellow limestone which was laid down during the Miocene period some 23 million years ago. Carcharocles is believed to have grown to 15 metres in length, which is about twice the length of the Great White, the largest shark alive today.

Elsewhere, the Duke and Duchess of Cambridge were delighted to come face-to-face with a rescue koala on Zoom.

The royal couple spoke to first responders and local business owners from Kangaroo Island in Australia to hear about the impact of the wildfires which hit the region in January and were happy to catch a glimpse of marsupial Grace, who is being cared for at a wildlife park after being hit by a car.

As park owner Dana Mitchell took the creature out of her enclosure to introduce her to the couple, Catherine exclaimed: "Oh look! So sweet."

The Duke and Duchess of Cambridge heard from local business owners and first responders from Kangaroo Island 🇦🇺 a small community off the south of Australia, who were impacted by devastating bushfires earlier this year. Not only have they had to rebuild their lives from the wildfires, but they also had to manage to the spread of COVID-19, which has hugely impacted their desire get back to a normal life. The bushfires caused significant damage to residents’ homes, livelihoods, along with thousands of animals and their habitats. Its residents, joined by our friend Grace 🐨, have shown an incredible community spirit and continue to provide support to those in need.

Prince William smiled and said: "She looks very well looked after, I have to say. Grace looks like she has a very nice life there."

The couple - who last visited Australia in 2014 - appeared shocked when Dana told them that the bushfires, which affected around 48% of the island, had seen the koala population decrease from 60-80,000 to an estimated 5-10,000.