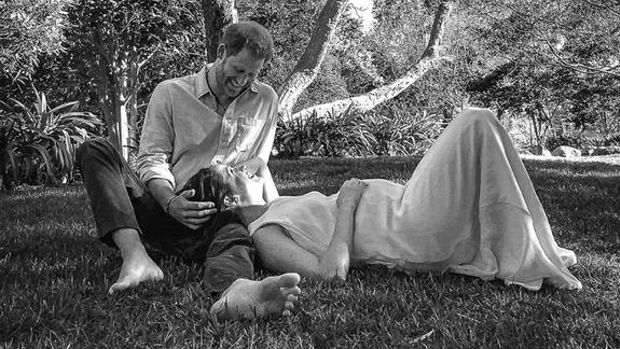 Prince Harry and Meghan Markle's recent baby news was actually made in tribute to Princess Diana.

Harry and Meghan's decision to announce their happy news on Valentine's Day served as a tribute to the prince's late mother, Princess Diana, who also used the romantic holiday to reveal she was pregnant with him back in 1984.

Prince Harry and Meghan Markle choose Valentine's Day to announce they are expecting their second baby.

On this day, in 1984, Princess Diana of Wales was on the front page of the Telegraph with news of her second baby. @JessicaCarpani has the latest - https://t.co/N3tSqhSq4Y pic.twitter.com/G4d6QpOVh0

The couple announced Meghan's pregnancy in a brief statement, which was accompanied by a black and white photo of Meghan lying with her head in Harry's lap and cradling her bump.

Their representative said: "We can confirm that Archie is going to be a big brother. The Duke and Duchess of Sussex are overjoyed to be expecting their second child."

Meanwhile, Queen Elizabeth is said to be "delighted" that the Duke and Duchess of Sussex are expecting their second child.

Prince Harry and his wife Duchess Meghan - who already have son Archie, 21 months, together - announced that the former actress is pregnant again and the 36-year-old royal's relatives, including his grandparents, the Queen and Prince Philip, and father Prince Charles, are thrilled with the news.

A royal spokesperson said: "Her Majesty, the Duke of Edinburgh, Prince of Wales and the entire family are delighted and wish them well."

The couple's baby joy comes just a few months after Meghan revealed she had suffered a miscarriage in July.

She was taken to hospital after experiencing a "sharp cramp" while changing Archie's nappy and described how both she and her husband were in tears as they came to terms with their devastating loss.

She wrote: "Hours later, I lay in a hospital bed, holding his hand. I felt the clamminess of his palm and kissed his knuckles, wet from both our tears. Staring at the cold white walls, my eyes glazed over. I tried to imagine how we’d heal."

And Meghan admitted her grief was "almost unbearable" and she has used her experience to call for people to be more open about their feelings, and to really listen to others when asking them how they feel.

She wrote: "Losing a child means carrying an almost unbearable grief, experienced by many but talked about by few. In the pain of our loss, my husband and I discovered that in a room of 100 women, 10 to 20 of them will have suffered from miscarriage. Yet despite the staggering commonality of this pain, the conversation remains taboo, riddled with (unwarranted) shame, and perpetuating a cycle of solitary mourning. Some have bravely shared their stories; they have opened the door, knowing that when one person speaks truth, it gives license for all of us to do the same. We have learned that when people ask how any of us are doing, and when they really listen to the answer, with an open heart and mind, the load of grief often becomes lighter — for all of us. In being invited to share our pain, together we take the first steps toward healing."