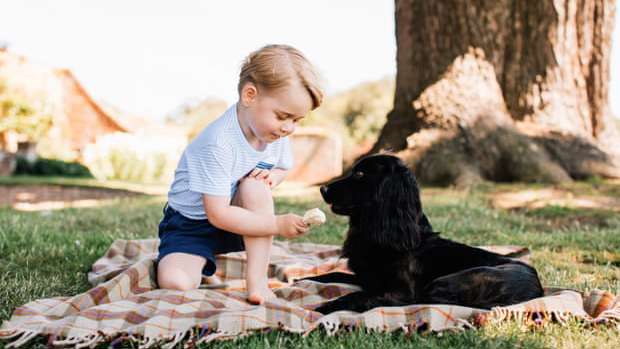 Prince William and Catherine, Duchess of Cambridge, are mourning the loss of their pet pooch Lupo.

The couple and their children - Prince George, seven, Princess Charlotte, five, and Prince Louis, two - have lost a key member of their family, as the royals have revealed their beloved English cocker spaniel has passed away after nine years in the family.

In a post on their Kensington Royal Instagram account, they wrote: "Very sadly last weekend our dear dog, Lupo, passed away. He has been at the heart of our family for the past nine years and we will miss him so much. - W & C (sic)"

The pooch often appeared in photos alongside the family, and the couple’s eldest son, Prince George, was particularly fond of the black pup.

Lupo was bred from a dog owned by Catherine’s parents, Michael and Carole Middleton, and was given to the Duke and Duchess of Cambridge in 2011.

It’s even thought Lupo helped them choose a moniker for Prince George when Catherine was pregnant after she and William scattered pieces of paper with various names on the floor, and Lupo was drawn to the one labelled "George".

Earlier this year, the Duchess joked about the family's pet while visiting Savannah House, a facility run by social justice charity Extern, in County Kildare.
As she played ping pong, the royal said: "We try to do this at home but our dog keeps catching the ping pong balls."

Meanwhile, Prince William recently opened up about his life at home with his children during the coronavirus pandemic, as he admitted George loves the outdoors and is like a "caged animal" when he can't go outside.

He said: "Seeing my children, seeing the passion in their eyes and the love for being outdoors. They find a bug or they love watching how bees are forming honey. George, particularly, if he’s not outdoors, he’s quite like a caged animal. He needs to get outside."