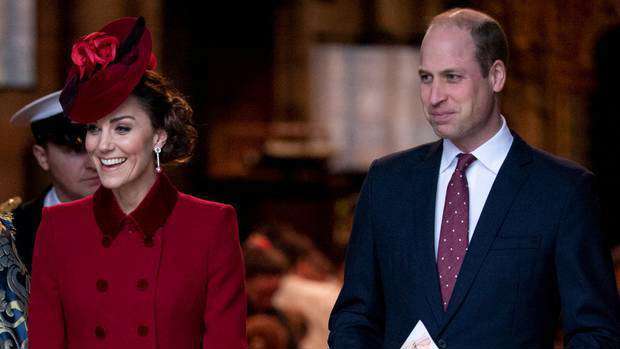 Prince William once bought Duchess Catherine a pair of binoculars as a romantic gift.

The 38-year-old royal first met Catherine - with whom he has children Prince George, seven, Princess Charlotte, five, and Prince Louis, two - at university in Scotland and he revealed she still hasn't forgiven him for the present, which he gifted to her early in their courtship.

Speaking on BBC Radio 5Live's That Peter Crouch podcast, William said: "I did get my wife a pair of binoculars once - she's never let me forget that. That was early on in the courtship that was. I wrapped them. They were really nice.

📸 Fun behind the scenes in March recording #ThatPeterCrouchPodcast, as part of the #HeadsUp campaign. Thanks to everyone involved in making it all happen! #PassThePod

"I was trying to convince myself about it. I was like, 'But these are really amazing, look how far you can see.' She was looking at me going, 'They're binoculars, what's going on?'. It didn't go well. Honestly, I have no idea why I bought her a pair of binoculars."

And William - who supports the Aston Villa soccer team - also revealed the social media staff at Kensington Palace don't allow him near his and Catherine's official Twitter account.

He explained: "They deliberately keep me away from that. I have tried a couple times, when Liverpool did that amazing semi-final against Barcelona, I grabbed hold of the Twitter thing and I just posted it.

🎙️ Talking curries, future Aston Villa legends, #HeadsUp and @England ⚽️ • The Duke of Cambridge has joined Peter Crouch for a special episode of #ThatPeterCrouchPodcast, in support of the Heads Up campaign. • Recorded in two parts — at Kensington Palace in March, and via video call earlier this month — ahead of this weekend’s #HeadsUpFACupFinal, the podcast covers the return of football during the coronavirus pandemic, and The Duke’s experiences of playing football himself and watching matches as a fan. • Listen to ‘That Prince William Episode’ via the @bbcsounds 🎧 app — Enjoy!

"It was an amazing match, I was literally blown away by it. It was one of the best games of football I've ever seen and I got completely out of control, I was like 'tweet that, get it out!'

Listen to Prince William's episode of The Peter Crouch Podcast: