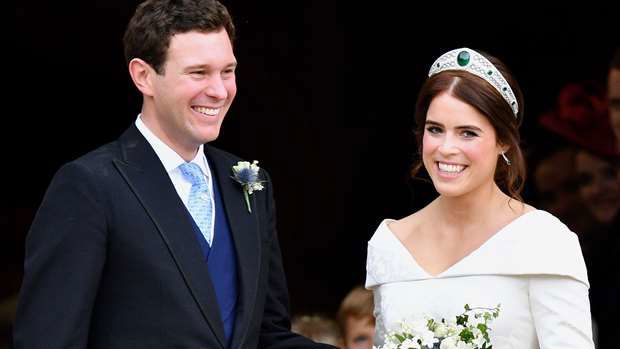 Princess Eugenie is celebrating two years of marriage with her husband Jack Brooksbank.

The 30-year-old royal tied the knot with Jack - with whom she is currently expecting her first child - in October 2018, and to mark their second wedding anniversary, she took to social media to share a montage of professional photos taken on their special day.

Alongside the video - which was set to London Grammar track, ‘Baby It’s You’ - she wrote: "Been the best 2 years married to you and 10 years with you in total…happy memories always my dear Jack. (sic)”

Been the best 2 years married to you and 10 years with you in total.. happy memories always my dear Jack

The sweet post comes after the couple announced their baby news last month.

Whilst a Buckingham Palace spokesperson confirmed: "Her Royal Highness Princess Eugenie and Mr Jack Brooksbank are very pleased to announce that they are expecting a baby in early 2021. The Duke of York and Sarah, Duchess of York, Mr and Mrs George Brooksbank, The Queen and The Duke of Edinburgh are delighted with the news.”

Meanwhile, it was recently reported Eugenie doesn’t want her impending arrival to have a royal title, as she would rather follow in the footsteps of her cousin Prince Harry and his wife Duchess Meghan, who chose not to give a title to their 17-month-old son Archie.

A source explained: "Even if the Queen offered them a title as a gift, it's not Eugenie or Jack's desire for their child to have a title. Eugenie knows that a title can be a curse as well as a blessing and she and Jack want their child to live an ordinary life and eventually work to earn a living. Titles really don’t matter to Jack and Eugenie, they just want a happy healthy child."