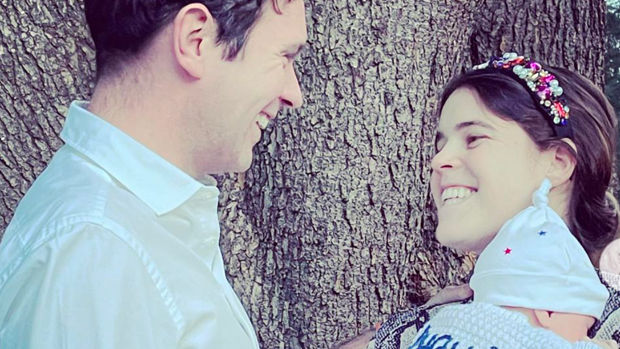 Princess Eugenie has given her followers another glimpse of her 1-month-old son August as she thanked them for their birthday wishes.

"Thank you for the birthday love yesterday," she wrote. "I got the best present I could ask for!"

The first photo shows Eugenie holding August, who's sporting a personalised outfit with his name embroidered on the back, alongside her husband Jack Brooksbank, 34.

A second photo shows Brooksbank holding his baby son with his little head resting on his shoulder.

Royal fans were quick to gush over the photos, wishing Eugenie a belated happy birthday and congratulating the couple on their beautiful baby boy.

"Oh my goodness. You look great and he is sooooo cute," one wrote, while a second commented, "He's beautiful."

"So lovely, congratulations to you both," added a third, while a fourth wrote: "So sweet! Happy belated birthday."

On February 9, the Queen announced the news of August's birth, saying the family were "delighted".

"Her Royal Highness Princess Eugenie was safely delivered of a son today, 9th February 2021, at 0855hrs at The Portland Hospital," the statement read.

Princess Eugenie and Jack Brooksbank were married in 2018, seven years after Prince Andrew's daughter and the successful wine merchant began their relationship.

Brooksbank was offered a title by the Queen before their marriage, but declined.

His decision means their son will not automatically receive a title.

"Even if the Queen offered them a title [for their baby] as a gift, it's not Eugenie or Jack's desire for their child to have a title," a family friend told Vanity Fair.

"Eugenie knows that a title can be a curse as well as a blessing and she and Jack want their child to live an ordinary life and eventually work to earn a living. Titles really don't matter to Jack and Eugenie, they just want a happy, healthy child."

Prince Harry and Meghan Markle, the Duke and Duchess of Sussex, earlier decided that their son Archie would not use the title to which he would be entitled, the Earl of Dumbarton.