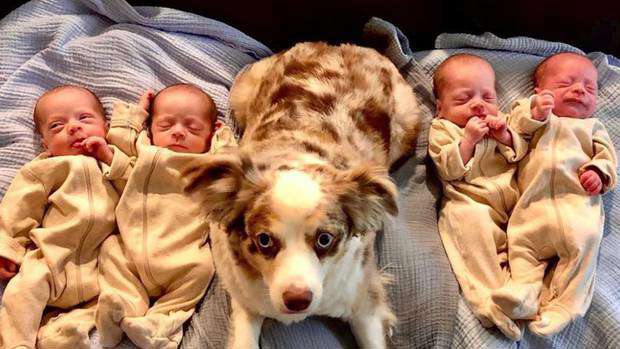 When Jenny Marr turned 34 she decided it was time to start a family. The Dallas, Texas woman and her husband Chris wanted one child to complete their family of four - their third family member being their dog, Zeke.

According to the Washington Post, Marr took a positive pregnancy test on October 6 and from there the couple counted down to the moment they'd be able to hear their baby's heartbeat for the first time.

But the ultrasound of their naturally conceived baby left the couple and their obstetrician shocked.

Marr told The Post: "Dr Murray began doing the sonogram, and all of a sudden she got this funny look on her face and turned the screen away from us.

"I immediately started thinking something was wrong with the heartbeat. I told her it was okay and that she could tell me if there was a problem."

But Murray assured the couple that there was "definitely a heartbeat".

"Actually, there are three babies in there."

Marr's husband responded by turning pale and passing out.

It would be another week before the stunned pair learned there was yet another baby hiding in Marr's womb.

"Yet again, the sonographer got this weird look on her face," Marr said. "We asked her what was taking so long, and she told us that she wasn't supposed to say since she's not a doctor. But she ended up blurting it out anyway, something along the lines of: Y'all, there are 100 per cent, four babies, in there."

"That's when three became four," said Marr's husband. "I told Jenny we shouldn't go to our next appointment because they'll just keep multiplying."

And according to high-risk-pregnancy specialist, Brian Rinehart, the Marrs had a 1 in 11 million to 1 in 15 million chance of conceiving their babies.

"Pregnancy, even with one baby, is hard on the body. Four is just ridiculous."

Because multiples share a placenta, it's crucial that everything from it - blood flow, nutrients and oxygen - is distributed evenly.

According to Murray, "The babies need to share the placenta evenly in order for all of them to survive."

While father-to-be, Chris, was said to be extremely worried during his wife's pregnancy, Jenny was "positive" and determined to face whatever challenges they might face.

But the pregnancy went smoothly and at 28 weeks, on March 15, Marr went into early labour - just when US hospitals were preparing to go into battle with coronavirus.

Delivered by C-section, the Marrs' four boys, came into the world.

Murray shared that delivering one baby is "exhilarating", "to deliver identical quads was just incredible."

What are identical monochorionic quadruplets?

The rare occurrence of identical monochorionic quadruplets happens when a fertilised egg splits in two, and both cells split again.

Different from fraternal twins, which develop from separate eggs that happen to both be implanted, identical multiples develop together and share one placenta.