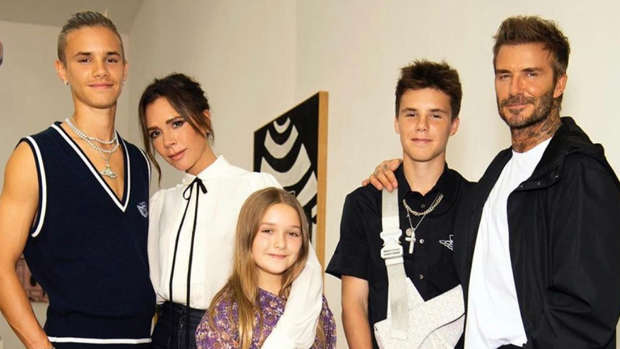 David and Victoria Beckham are "so proud" of their son Romeo after he landed his first cover for L'Uomo Vogue magazine.

The 45-year-old former football ace and his fashion designer wife have gushed over their 18-year-old son's solo debut for the fashion bible.

Spice Girl Victoria wrote alongside the cover on Instagram: "Proud of you @RomeoBeckham."

The proud parent also posted a series of snaps from the shoot by Mert Alas and Marcus Piggott and their video of her son modelling a bright blue crop top and white vest.

The blonde-haired teen - who is the spitting image of his dad when he was his age - also received praise from his father, who added to his profile: “So proud of you. What an incredible first cover.”

While his son - who is dressed head-to-toe in Prada on the cover - wrote: “Excited to share my first cover shoot for @luomovogue.”

Meanwhile, it was recently claimed that Romeo's older brother, Brooklyn, is considering a career in fashion.

The 21-year-old photographer is keen to move in front of the camera and signed up to be represented by Robert Ferrell, who has previously managed the careers of the likes of Kate Moss, Naomi Campbell and Claudia Schiffer, and insiders think it's only a matter of time before he lands some major campaigns.

A source claimed in December: "Brooklyn has a recognisable face now and is in high demand in the fashion world, especially as he’s the son of David and Victoria.

“He has got one of the industry’s leading names to help build him up and bag him lucrative deals.

Brooklyn made a name for himself as a photographer when he was just 18.