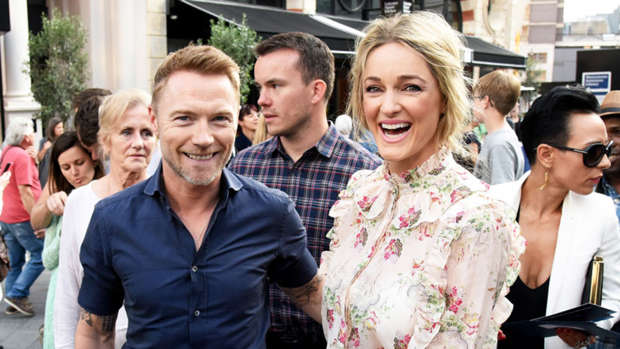 Ronan Keating has become a father for the fifth time.

The 43-year-old singer and his wife Storm - who already have Cooper, two, together - have welcomed their second child together, and Ronan’s fifth overall, after Storm gave birth to a daughter named Coco Knox Keating on Friday (27.03.20).

Confirming the news on Twitter and Instagram, Ronan - who also has Jack, 21, Missy, 19, and Ali, 14, with his first wife Yvonne Connolly - wrote: “Hello world. Spreading some good cheer at this time with the announcement of the safe delivery of our little girl Coco Knox Keating. Calmly arrived on 27/3/20. Mama & Baba are rocking #HappyTimes #KeatingClan #BabyKeating (sic)”

Hello world 👶 Spreading some good cheer at this time with the announcement of the safe delivery of our little girl Coco Knox Keating. Calmly arrived on 27/3/20. Mama & Baba are rocking #HappyTimes #KeatingClan #BabyKeating

Storm also shared the same image of the two of them with their new bundle of joy - whose face was blurred out - on her own Instagram account.

She wrote alongside the snap: “A beautiful calm birth thanks to Claire Mellon and all the wonderful team at @theportlandhosp Thank you so much for taking such great care of us [heart emoji] Coco Knox Keating, born 27.03.20 #myheartcouldburst #ourlittlegirl @rokeating (sic)”

The couple revealed they were expecting a baby girl last month, after announcing Storm’s pregnancy in November last year.

Can’t believe this incredible woman. A force to be reckoned with - hours from our little girl arrives in this world and she is chasing Coops around the garden. Even in our strange circumstances she is keeping the normal and focusing on what’s real ❤️

Ronan shared of the couple's happy news: "Yes, we're having a baby girl! It's super exciting. We are very lucky and I am so happy for Storm."

Storm added: "I've always wanted at least one of each sex so I'm feeling very blessed. That's five kids in total now, so that's enough, we're going to have to get Ro to have the snip."