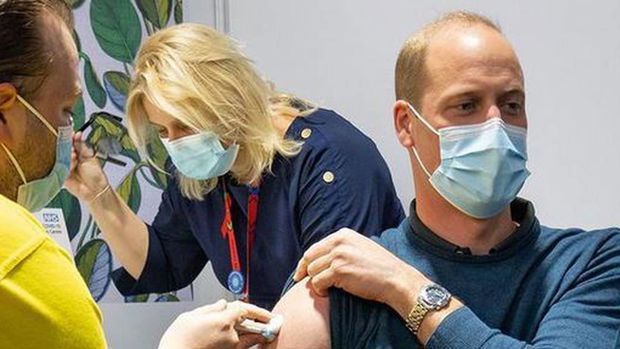 Prince William has received his first coronavirus vaccine and it's gotten royal fans are very excited ...

The 38-year-old royal paid tribute to all those involved with the rollout of the coronavirus immunisation programme in the UK as he shared a picture of himself getting the jab earlier this week.

He wrote on the Instagram account he shares with wife Catherine, Duchess of Cambridge: "On Tuesday I received my first dose of the Covid-19 vaccine.

"To all those working on the vaccine rollout - thank you for everything you’ve done and continue to do."

But it was the photo that accompanied the caption that had people hot and bothered as it showed the royal exposing his well-toned bicep.

"Guns," one fan wrote along with the bicep emoji.

"He is really fit," another added.

"Prince William has some guns..."

"Look at them guns."

"Get those gains brother."

This isn’t the first time Prince William has been commended for his looks, recently he was also crowned the World’s Sexiest Bald Man.

William – who has sons Princes George, seven, and Louis, three, and daughter Princess Charlotte, six, with wife Kate Middleton – was reported in November to have secretly battled coronavirus in April 2020 but though he was "hit pretty hard" and even "struggled to breathe" at times, he didn’t want to make his health issues public because there were "important things going on” that he didn’t want to detract from.

The prince’s grandparents, Queen Elizabeth and the late Prince Philip received their first vaccinations in January, and his father Prince Charles, and stepmother Camilla, Duchess of Cornwall, had theirs in February.

The 94-year-old monarch previously said the process of getting her vaccine had been "very quick" and "didn’t hurt at all".

And the queen called on people to "think about others" and have the jab, even if they felt hesitant.

She said: "Once you've had the vaccine you have a feeling of, you know, you're protected, which is I think very important.

"And I think the other thing is that it is obviously difficult for people if they've never had a vaccine… but they ought to think about other people rather than themselves."