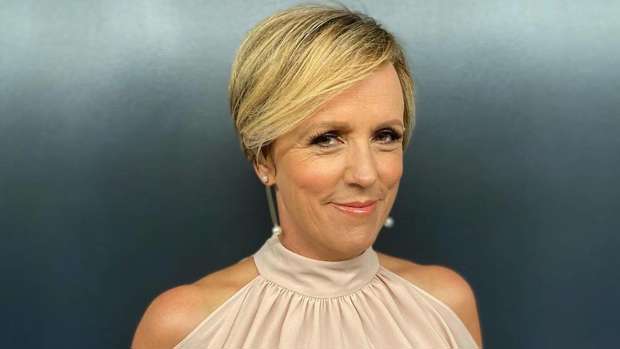 Hilary Barry has taunted her critics with her latest ensemble.

The Seven Sharp host took to Instagram to show off her new outfit, featuring a shoulder-revealing top.

"Some might accuse me of deliberately dressing like this to wind up Ken, Geoff and Barbara. They're not wrong," she captioned the photo.

The TV host is referring to previous occasions when she's faced backlash for her outfits.

Last year a social media user wrote on Instagram: "Good god, Hilary! What are you wearing tonight? Looks like something you picked up at an op shop? Get some style advice, girl."

However, the man was swiftly put in his place.

"Piss off, Ken," she replied, then sharing her response to her Instagram followers.

Members of the public taking a swipe at the TV host's attire is nothing new and her quick-witted responses never fail to amuse.

Earlier in the year, Barry was told "dress properly" by a man on social media.

He was referring to another off-shoulder top Barry wore while hosting Seven Sharp with Jeremy Wells.

"This is for every Geoff who ever told a woman what to wear or what part of her body to cover up. We will not be told. Not now. Not ever."

Last year a disgruntled viewer named Barbara made a complaint to Seven Sharp with the subject header "Hilary's cleavage" in which she claimed to have been "assailed" by Barry's preference for plunging necklines and choice of chesty clothing.

"It's a fact of nature that women's breasts are sex objects and should be kept private except for at the beach or at an evening do."

Barry's response let viewers know that she wasn't having a bar of it.

"Well here's the thing Barbara, I'm just a middle-aged mother of two who slapped on some lippy and a pretty top to look presentable for the nation," she said.