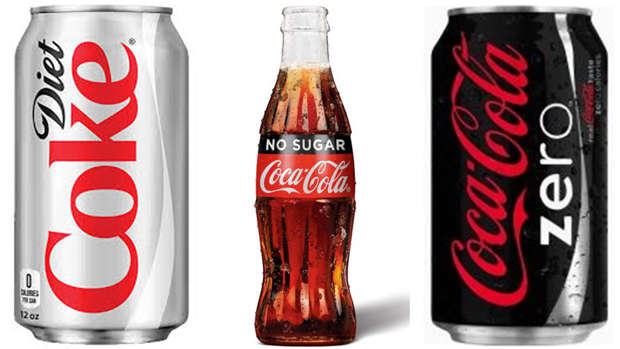 They account for about 43 per cent of Coca-Cola's sales.

But with two zero-calorie options to choose from, is there really a difference between Diet Coke and the re-branded Coke No Sugar?

It turns out there is a subtle difference between these two sugar-free beverages - and it's all down to a single chemical.

Fans were in an uproar when Coca-Cola announced it would be rebranding Coke Zero as Coke No Sugar.

But though the recipe has changed, fizzy drink lovers can be assured that new Coke No Sugar contains exactly the same ingredients as before.

It does, however, differ from Diet Coke, which first launched in the US in 1982 before coming to the UK a year later. Diet Coke has now been rebranded as Coca-Cola Light in the States.

The two drinks are mostly made up of the same ingredients, with a couple of very small differences.

Diet Coke contains citric acid, which isn't found in Coke No Sugar, while the Zero brand contains sodium citrate and no citric acid.

But how does the taste differ?

Coca-Cola says the new Coke No Sugar is closer to the taste of Coca-Cola Classic, while Diet Coke has a "lighter taste".

In a statement, a spokeswoman from Coca-Cola Great Britain said: "Both drinks are sugar-free and calorie free.

"Coca-Cola Zero Sugar looks and tastes more like Coca-Cola Classic, while Diet Coke has a different blend of flavours which gives it a lighter taste."