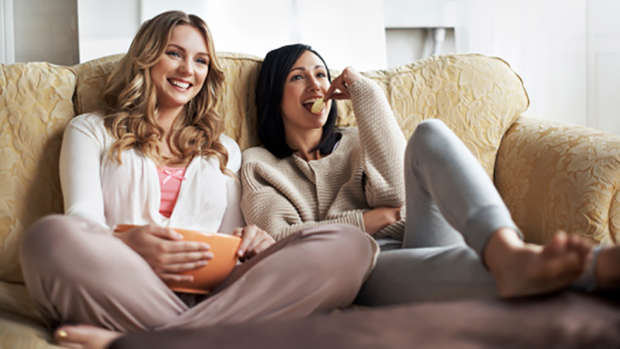 We've all used the line "our periods must be syncing up" when we've spent a significant amount of time with our gal pals.

80 percent of women in a study conducted by the Journal of Reproductive and Infant Psychology believe it is a real phenomenon, and 70 percent said they liked that it happened, because it evokes an idea of sisterhood.

But as much as we want to stand in solidarity with our sisters, it turns out syncing periods is just not true.

Glamour reports that the people at the period-tracking app Clue teamed up with the University of Oxford to figure out whether menstrual syncing is actually a thing and they found out it's really not.

In fact, women in the study actually got pretty out of sync with their closest friends during research.

Glamour reports researchers looked at 360 pairs of close-knit women, including friends, roommates, sisters, partners and more. In 273 of the 360 pairs, their cycles were actually farther apart at the end of the three-month study period than when the study began, meaning their cycles didn't sync together, they migrated apart.

Contrary to what you might have expected, women who lived together during the research were actually found to have diverging cycles, not converging ones.

Clue data scientist Marija Vlajic told Glamour math and hope are behind the common misconception that menstruates sync up. Because cycle lengths can vary, Marija said general patterns could make your period sync with a friend for a short time, but that doesn't mean you're actually menstruating together.

"Say I get my period today and you get your period in 10 days. At this point, we differ by 10 days, and say that your cycle is two days shorter than mine. So then, when we get our next cycle, the difference will only be eight days," she said.

And when we hear that we get excited and think everything's lining up and the moon and stars affect us when really.... it doesn't.

"It can be very emotional and very exciting when you notice that you and your friend kind of sync, but it's important to look at it from the more rational side," Marija said.