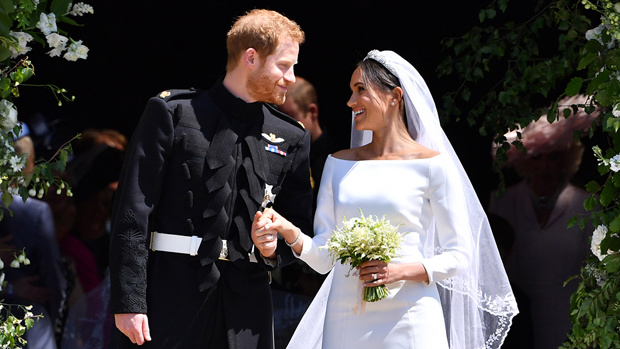 Royal fans have spotted a secret message on the car Prince Harry and Meghan Markle used at their wedding.

Three years after their 2018 nuptials, Sussex superfans zoomed in on the vintage Jaguar E-type that Prince Harry drove to the reception, reports the Sun.

And excited fans have shared their thoughts after only just noticing the detail.

"Yoooo I am so embarrassed. I was watching the royal wedding for the 200th time and it's only now that I noticed the licence plate," one person wrote online.

Another added: "Awww! I never knew. Thanks for sharing. Meghan and Harry are so intentional in everything they do.

"Just special. How I wish I knew them in real life."

The couple were married in front of hundreds of guests in a wedding that's estimated to have cost around $59 million.

This year, Meghan made headlines after telling Oprah Winfrey that she and Harry were married "in our backyard" ahead of the lavish public ceremony.

Meghan had told the chat show host that only she, Harry and the archbishop were present, but Stephen Borton, who drew up the wedding licence, then told the Sun that she was "obviously confused".

The archbishop said the wedding seen by millions across the world was the real thing.

"If any of you ever talk to a priest, you expect them to keep that talk confidential. It doesn't matter who I'm talking to," he said.

"I had a number of private and pastoral meetings with the Duke and Duchess before the wedding.

"The legal wedding was on the Saturday. I signed the wedding certificate, which is a legal document, and I would have committed a serious criminal offence if I signed it knowing it was false.

"So you can make what you like about it, but the legal wedding was on the Saturday.

"I won't say what happened at any other meetings."

According to the law, a marriage cannot take place without two witnesses. A copy of the wedding certificate confirms that the ceremony took place on May 19 at Windsor Castle.

The witnesses are recorded as Prince Charles and Meghan's mum Doria Ragland.