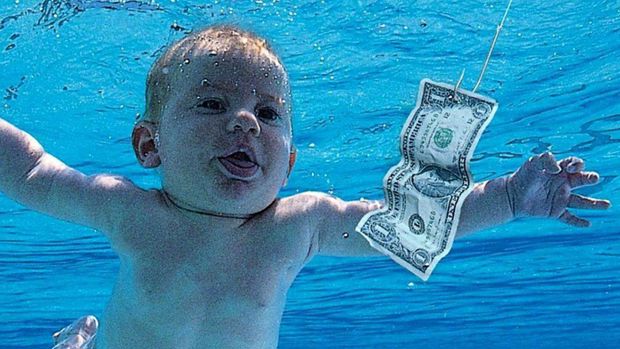 Spencer Elden was four months old when he was photographed in a swimming pool reaching out for a dollar bill on a fishing line for the 1990 classic record's artwork.

Now 30 years old, Elden has claimed his parents didn't sign a release authorising the use of his image on the cover, and he has also alleged that the nude image is child pornography.

As reported by the BBC, papers filed in California have claimed: "The images exposed Spencer's intimate body part and lasciviously displayed Spencer's genitals from the time he was an infant to the present day."

Although US law doesn't typically consider non-sexualised pictures of infants as child pornography, his lawyer Robert Y. Lewis has argued that the superimposed dollar bill makes the baby seem "like a sex worker". It has also been alleged that the group promised to cover his genitals with a sticker, but this wasn't upheld.

Elden has claimed he has "suffered and will continue to suffer lifelong damages" because of the artwork.

As well as "extreme and permanent emotional distress", he also claims to have faced "interference with his normal development and educational progress" and received "medical and psychological treatment".

The LP is one of the band's most iconic records, and boasting the hit singles 'Smells Like Teen Spirit' and 'Come As You Are'.

He has requested damages of $150,000 (£109,000) from each of the 15 defendants named in the lawsuit, which includes photographer Kirk Weddle, late singer Kurt Cobain's former wife Courtney Love, the managers of his estate, and band members Dave Grohl and Krist Noveselci.

Representatives for the band and their labels are yet to respond to the allegations.

In the past, Elden has recreated the cover both as a teenager and an album - while wearing swimming trunks - for the album's 10th, 20th and 25th anniversaries, and at different times he has described the photo as both "a positive" or something that felt like his "human rights" were revoked.