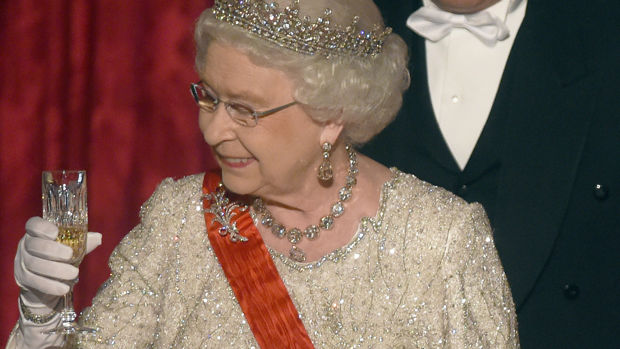 Queen Elizabeth II is undoubtedly one of the most proper people in history.

But it seems the monarch once had a bit of a wild side ...

When working as a mechanic for the armed forces at the age of 19, the Queen kept note of her memories in her personal diary.

And now, extracts of the diary have been published - with her blessing - in the biography The Final Curtsey, penned by her cousin Margaret Rhodes.

On May 8 in 1945, the then-princess listened to Prime Minister Winston Churchill announce via radio the "unconditional surrender" of Germany, marking the end of World War II.

As Britain erupted with joy and London broke out into a spontaneous celebration - Her Majesty also got swept up in the ongoing celebrations.

And celebrate she did - partying and drinking over four raucous days.

"Sixteen of us went out in the crowd," she wrote, adding that after cheering on her parents when they appeared on the balcony of Buckingham Palace, she and her friends went up St James Street in Piccadilly.

As festivities continued throughout London over the coming days, the young princess was once again part of it.

She and her group of friends even "ran through [the] Ritz" before they "walked miles, drank in Dorchester" and then joined crowds outside Buckingham Palace – shoulder-to-shoulder with "so many people" – to wave up at her parents.

One diary entry even recorded that she conga danced into Buckingham Palace with her friends and sang until 2am, before eventually going to bed at 3am.

It's incredible to imagine the Queen being out and about partying!