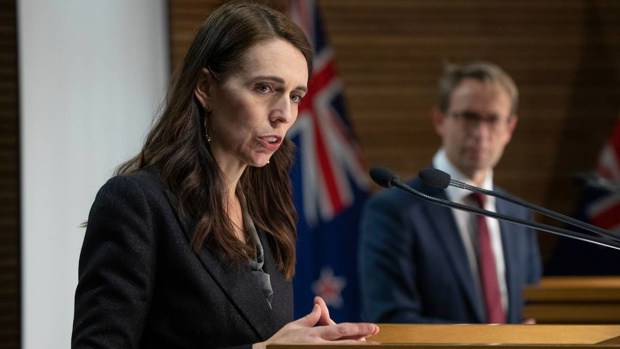 There are now 21 Delta Covid cases in Auckland, including two in hospital.

Nineteen are in the Auckland quarantine facility.

Twelve of the 21 have been confirmed as part of the same Auckland cluster. A further eight are being investigated and are expected to be part of the cluster.

The other - an air crew member - is not expected to be linked because it is a border-related case.

Two people were taken to North Shore Hospital overnight. One had worsening symptoms and the other had underlying conditions. One is in their 20s and one in their 40s. Both are stable.

Prime Minister Jacinda Ardern and director general of health Ashley Bloomfield are updating the nation on the latest cases.

The new community cases are not unexpected, Bloomfield said, and he expects the numbers to grow.

There are 8 new cases in recent returnees in MIQ - two are historical.

Two of the community cases taken to North Shore Hospital overnight. Both are in stable condition.

There was a hold put on some departures from Crowne Plaza overnight after three people there tested positive at day 12 of their stay.

Some returnees are now required to stay there longer while CCTV footage is examined.

Genome sequencing results are expected later today. Returnees on other floors at the facility scheuled to leave today will be able to do so.

Wastewater testing from sampling on Monday returned positive results from Rosedale, and Western and Eastern interceptors.

There will be further results available today for wastewater samples taken across Auckland, and Coromandel and Thames.

Sampling taken in other parts of the country have all come back negative.

Ministers will announce tomorrow an update on Alert Level 4 restrictions for the rest of the country.

Pop up testing sites remain open in various parts of the Coromandel Peninsula.

There were 16,000 swabs taken across Auckland, the busiest day since August last year. Around 10,000 taken in urgent care clinics and practises.

Bloomfield urges people to be kind to staff while they wait to get tested.

The PM said the current positive cases are a close match with a recent returnee from Sydney on a managed red zone flight on August 7.

That person returned a positive result on August 9 and was transferred from Crowne Plaza to Jet Park on that same day.

They were taken to Middlemore Hospital on August 16.

The current cases most likely came from the traveller.

There is still a chance that additional information could emerge, and there could be other possibilities, Ardern said. However, the balance of evidence now gives us enough confidence to start search for missing link, she said.

"If it holds up under further investigation then the later arrival date means that we are looking at a much shorter chain of transmission and fewer cases than the early results suggested."

Middlemore Hospital is not a line of investigation at this stage.

There are 407 staff members across these sites who have been compliant with vaccination order. Only four had one dose.

Compliance has been high, but the search across both sites will continue, Ardern said.

A family adjacent to a case at Crowne Plaza has now tested positive on their day 12 test.

The Government is chasing down every possible point at which the infected Crowne Plaza returnee had contact with others.

We can expect a high level of infectivity at this stage, Ardern said.

There were 16,000 swabs taken across Auckland yesterday, the busiest day since August last year. Around 10,000 taken in urgent care clinics and practises.

Bloomfield urges people to be kind to staff while they wait to get tested.

There were 360 close contacts identified this morning of the positive cases. This will increase significantly as it does not include Avondale College, Bloomfield said.

People who visited a location of interest are being told to self isolate and call Healthline for advice.

About 1.3m people accessed the Ministry of Health website yesterday.

Anyone over the age of 40 can book a vaccination now, Ardern reminded people. There were 195,537 bookings made yesterday, the highest for one day.

A phased approach to re-opening vaccination sites began today. If you have a booking, and had no communicaiton from provider, please still go, Ardern said.

Cabinet has agreed to make Pfizer vaccine available for 12-to-18-year-olds. They can book along with everyone else from September 1.

From tomorrow morning, parents will be able to book their child's vaccine.

There are more than enough vaccines for everyone, Ardern said.

Earlier today, New Zealand deployed a C130 Hercules to evacuate New Zealanders, Afghani nationals and others from Kabul. Up to 80 personnel have been approved to help the international response, Ardern said.

Some individuals bound for New Zealand may return with other partners of New Zealand, Ardern said.

"I know that you will do what you can," Ardern said about NZDF personnel involved.

Earlier, it was revealed a 25-year-old teacher from Avondale College tested positive after her flatmate contracted the virus from a co-worker.

She was at school for two days last week and on Monday this week when she was infectious.

All students and staff were told to get tested and self-isolate for 14 days, even if the rest of the country moves out of alert level 4.

Health authorities had been working with the Ministry of Education through the morning to help the school communicate with students.

So far 10 cases have been confirmed in the Auckland community - eight are connected to Tuesday's case, a 58-year-old man from Devonport, and one is connected to the border.

They include an Air New Zealand air crew worker who visited Japan this month, an AUT student who attended a lecture with more than 80 other people, an Avondale College teacher, and Auckland City Hospital nurse who worked four shifts while infected.

Coromandel residents are anxiously waiting to hear if the virus has spread to their town, after Tuesday's case and his wife visited the area at the weekend.

Bloomfield said modelling shows cases could jump to as high as 120, especially because most of those who have already tested positive visited a number of highly-populated areas including night clubs, a casino, a church and restaurants.

The Ministry of Health have identified more than 75 potential exposure sites, more than 60 across Auckland and 14 on the Coromandel Peninsula. The earliest location of interest dates back to August 3 - potentially signalling a much wider window of exposure.

New locations of interest have been added to the ministry website this morning, including Countdown Lynfield.

Bunnings Warehouse in Glenfield is also now on the list.

The latest locations of interest update shows 109 visits to 89 locations.

An update on wastewater testing results is also expected.

Daily samples are now being taken at Rosedale on Auckland's North Shore, where many of the cases are linked.

ESR has also increased the number of wastewater samples taken at other sites around Auckland.

Composite sampling of Whitianga and Coromandel Town was set up yesterday with further samples being taken in Coromandel at Pauanui, Tairua and Whangamata. Sampling at Thames will be under way today.

The first results from these samples can be expected tomorrow.

Wastewater testing is continuing at ESR's other 26 sites across the country.