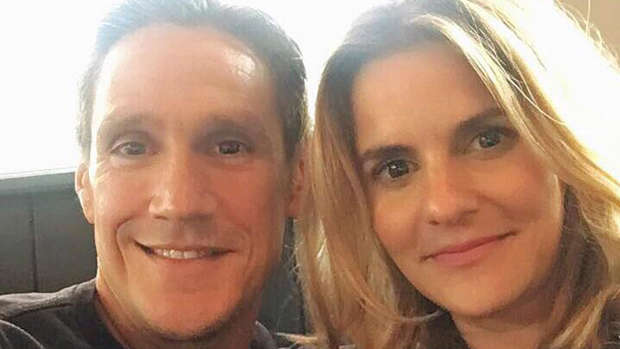 A man has revealed how he met his future wife after he accidentally sent her a message on WhatsApp.

Michael Evangelou, 44, was trying to text himself a reminder but mistakenly typed the number of Lina Dahlbeck, 37, a make-up artist from South London.

In a plot worthy of a Hollywood rom-com, the pair struck up a flirty conversation and agreed to meet for drinks at a London bar that same night.

Just two weeks after their first date in September last year Michael, a car salesman, asked Lina to marry him while they were watching TV.

The couple tied the knot three months later and are now planning to move to Dubai to start a family together.

Lina said: "If someone told me I would meet my future husband when he sent me a text out of the blue, I would never have believed them.

"People are astonished every time I tell them how we met.

"Some of my friends have even started sending Whatsapp messages to random numbers in the hope of finding romance."

READ MORE:
• Apparently this is the ultimate sign you and your partner are meant to be...
• The bizarre new engagement ring trend couples are opting for...

Michael agreed: "It's certainly a crazy way to meet someone. Everything snowballed but in a good way. She's the woman I want to spend the rest of my life with."

Michael explained he had written a text message saying "Girls Trip" to remind himself to watch the 2017 romantic comedy starring Queen Latifah.

But he accidentally added a '1' to his own number and instead the message arrived in Lina's inbox.

The make-up artist replied, saying: "Hi! Girls trip? Who's this please? I'm guessing this was intended for another Lina" and added a wink-face emoji.

Michael quickly explained his mistake and asked if they knew each other.

He wrote: "Haha sorry I thought I was sending it to my own number. It's Michael Evangelou, don't know how your number got stored under mine Lina. Do you know me?"

The couple realised they had never met, but kept messaging.

Lina said: "We started chatting back and forth. I think if I wasn't single I wouldn't have continued the chat."

As their messages took on a flirty tone, Michael suggested they meet up for a drink that same night and they met at a bar near London Waterloo station just hours after their first texts.

The chemistry between the couple was apparent and by the end of the night the pair were convinced they had been brought together by fate.

They moved on to another bar and met up the following day for brunch.

"We haven't been apart since," Lina said. "We were immediately a couple. It felt so natural, as though we had always known each other."

Lina said: "We were talking about our dreams and I said I had always wanted to live in Dubai. Michael said: 'Let's do it, let's move there together.'

"I explained that it was a Muslim country so we would have to be married to live together. It wasn't a hint at all but he said: 'Let's do it then. Let's get married'.

"I thought: 'Is that a proposal?' I asked him if he was serious and he assured me that he was. He said: 'I want to spend the rest of my life with you, Lina'.

"Even though we were just sitting at home with the television on, it felt romantic. I knew I wanted to marry him."

Michael explained: "It seemed crazy but the way we met was crazy - everything fell into place.

"Two previous girlfriends had asked me to marry them but I had said no. I wouldn't do something that felt wrong but with Lina it was natural. It was like we had known each other for years."

The couple admitted some of their friends and family needed to be convinced that their whirlwind romance was the beginning of a lasting relationship.

Lina said: "Most of our friends thought we were a bit nuts but they agreed that if it's right you know and there are no guarantees in this life.

"My parents and Michael's parents were delighted. I had already met his mum but because my parents live in Sweden, they didn't meet Michael until the day before the wedding.

"They were happy for us. They did think it was quick but they didn't question it."

Lina explained that her job as a make-up artist meant she had worked at a lot of weddings and had a clear idea of what she wanted for her own big day.

The couple tied the knot in a romantic ceremony at Morden Park House on 7 December in front of 30 guests with Lina wearing a delicate white fishtail gown.

In March, the couple will jet off to Dubai where Lina will launch a makeup school. They also hope to start a family together.

Lina added: "We definitely want to have children now. Bring it on! I want three kids and Michael wants two so we'll see what happens."

Sometimes Lina still wonders what might have happened if Michael never sent a message to remind himself to watch a film.

She said: "I had given up on love and then Michael sent that message and literally landed in my life. My story gives hope to everyone: never give up!

"He's my dream man and it's destiny. The universe had something to do with this for sure."