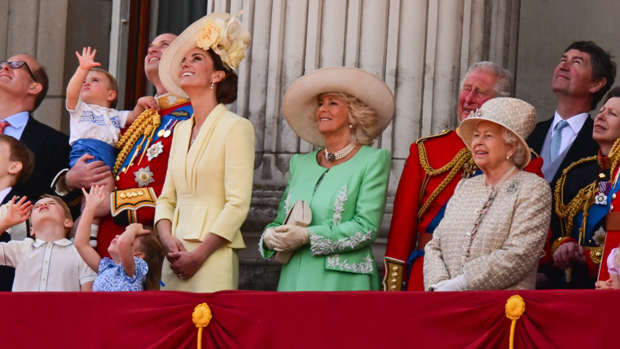 Queen Elizabeth's official birthday will be marked with a low-key ceremony.

The annual Trooping the Colour parade was cancelled in March due to the coronavirus pandemic, but Buckingham Palace has now confirmed the occasion will still be marked this weekend with a private ritual, that will be subject to social distancing rules.

The 94-year-old monarch - who was last seen at a major event on 9 March for the Westminster Abbey Commonwealth Day service - will take two royal salutes from the Welsh Guards at Windsor Castle.

The ceremony will be carried out by a detachment from the 1st Battalion Welsh Guards, who were due to be part of the Queen's Birthday Parade on Horse Guards in Whitehall, London, before Trooping the Colour was axed.

The queen will receive a royal salute when she arrives at the castle's quadrangle, which will be followed by a set of military drills and a musical performance from a Band of the Household Division.

The drills will include the colour being paraded in front of the servicemen and the ceremony will then draw to a close with a second royal salute before the guardsmen and musicians march from the quadrangle.

Confirmed: The Queen will take part in a much reduced parade for her official birthday on Saturday.
The annual Trooping the Colour parade was cancelled by #coronavirus. But there’ll be a much smaller military commemoration in Windsor instead 👇 pic.twitter.com/c0TcLX6fJ0

All the guardsmen and musicians will perform two metres apart, in line with social distancing guidelines.

Huw Edwards will host a BBC One programme to cover the event.

Trooping the Colour usually sees a gathering of various members of the royal family on Buckingham Palace's balcony to watch a flypast and acknowledge the thousands of spectators who gather on the mall for the spectacle.

Shortly after lockdown measures were announced in the UK, royal officials confirmed Trooping the Colour would "not go ahead in its traditional form" and a number of options were being considered.