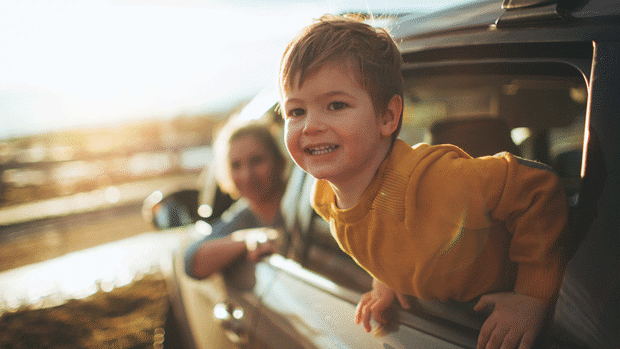 "I absolutely cannot wait to be stuck in the car with my children for five hours non-stop," said absolutely no parent ever.

"I would just love to be strapped into a seat unable to move for half a day," said no 4-year-old in the history of 4-year-olds.

Driving long distances with young kids is never going to be a dream. But with a little preparation and planning, you're already halfway there.

Check the map and plan your stops

Kids need to stretch their legs, so plan some stops. Which towns will you pass through? Where are the playgrounds along the way? How about a picnic spot?

If you're heading north from Auckland, consider skimming the coast so the kids can run amok on a beach for 10 minutes. If you're headed south, did you know that Hamilton has a collection of eight "destination playgrounds"? I can recommend the fairy garden-like play area in Hamilton Gardens, with its treehouses, giant caterpillars, and a secret doorway through a tree trunk. The large Hare Puke playground has a bike track, social swings, and a massive multi-kid slide.

Whether it's an activity kit, a notepad, and pencils, or a sheet of reusable stickers for the window, a couple of bucks spent may just buy you 20 minutes' peace once you're on the road. Grab some newspaper and wrap it up - what kid doesn't love opening gifts? - and keep it hidden. Roll it out when the going gets tough.

Don't wait until you're halfway through the Karangahake Gorge to fire up Spotify. New Zealand's regional 3G is surprisingly patchy, and you don't want to be dealing with an urgent request for Weird Al Yankovich's Hamilton Polka when the service has dropped off.

If you didn't get your ducks in a row early enough, a game of One for One (where each member queues up one song at a time) ensures a good mix. In our car, we bounce from Lorde to Queen to Genesis every 10kms or so.

Looking for family-friendly music options? Try The Kinks and The Beatles. If you can handle some noise, Bohemian Rhapsody will blow kids' minds, as will the Finnish heavy metal band for kids, Hevisaurus, who perform as dinosaurs.

Do not leave home without

Snacks. Those little humans burn energy fast, so have plenty of options on hand. A well-timed box of raisins or cheese sandwiches could save you 20 minutes queuing at a small-town bakery.

Rubbish bags. Nothing worse than arriving at your destination with wrappers and apple cores all rolling around by your feet.

Sick bags. Handily, a rubbish bag will do.

A reusable water bottle. Nothing adds an hour to your journey like stopping at rural dairies for items you easily could have brought yourself.

What to do while you drive

Look, I'm not trying to teach you to suck eggs here. But the road-trip gaming world goes further than I Spy (still an excellent game - try it with colours. "Something that is green" for if your kids aren't spelling yet), and the Silence Game has never worked for any parent in real life.

If your kids are into storytelling, try playing Once Upon a Time, where you tell a story between you, one line at a time. Your small ones are guaranteed to devastate your carefully planned twists and turns by introducing plot holes and McGuffins, but it's pretty funny.

The Alphabet Game, that old fave in which you move through the alphabet via a chosen category (apple, banoffee pie, cinnamon…) is easily livened up with some interesting categories (invent an animal and describe it). And Would You Rather is as good as it ever was (would you rather swim through a pool filled with worms, or eat ants on toast? Ants, thank you very much).

For mindless fun, there's the Counting Game (simply count as high as you can, one person at a time, in no particular order. If two people count at the same time, return to zero).

Alternatively, Sheep Count can pass a few miles - you get one point for every sheep that's eating, one for each that is walking, two for those that are walking and eating, and three for philosopher sheep (the ones who are simply staring out to space).

There's a wealth of quality children's podcasts out there, and a lot of crap as well, so some research beforehand will pay off. Our family loved The Two Princes, a 14-episode fairytale adventure about two princes from warring kingdoms who eventually fall in love. It's sweet and funny, exceptionally well produced, and stars enough famous voices to have you guessing for hours.

Other options include David Walliams' Elevenses, What If World (what if you could go to Everest for a holiday? what if mermaids turned into robots?), That's Incredible (amazing facts about music, bodies, food and so on) and Story Pirates (stories made up by kids, and told by adults).

Failing that, just search for "audiobooks for kids" in whichever music app you favour.