Carole Baskin breaks down in tears as she opens up on the impact Tiger King has had on her life.

The Big Cat Rescue CEO featured on the hit Netflix series - which focused on her feud with former G.W. Zoo owner Joe Exotic, who is currently serving 22 years in jail on two counts of hiring someone to murder Carole and multiple violations of animal welfare laws - admitted she tries to ignore the fallout from the show.

Speaking to Dancing With The Stars partner Pasha Pashkov on tonight's episode of the competition, she said: "I keep it inside. That is the absolute worst of this."

Carole Baskin opens up about her 1st week on #DWTS!@DancingABC@ReeveWillhttps://t.co/shidnvjhYN pic.twitter.com/l7M6G0LIho

Despite Joe's criminal actions, Tiger King viewers considered him an anti-hero, whilst Carole was branded a villain due to Joe losing his animal park as well as his freedom, and the rumours that were given screen time by the filmmakers about the mysterious disappearance of her second husband Don Lewis.

Carole recently insisted she is "not at all the person" she was portrayed to be in the documentary, as she is simply desperate to see animals free from harm.

She said: "I am not at all the person I was portrayed in Tiger King. I am not the money grubbing, gold-digging, murderous person that they portrayed.

"I am the type of person who will come after any person who is abusing animals. I am relentless. I just won't stop until I find some legal way to make it stop. From that perspective, I think they got me right.

"Me as a person, that was a total assassination of my character for nothing other than whatever money they could get for selling that to Netflix." 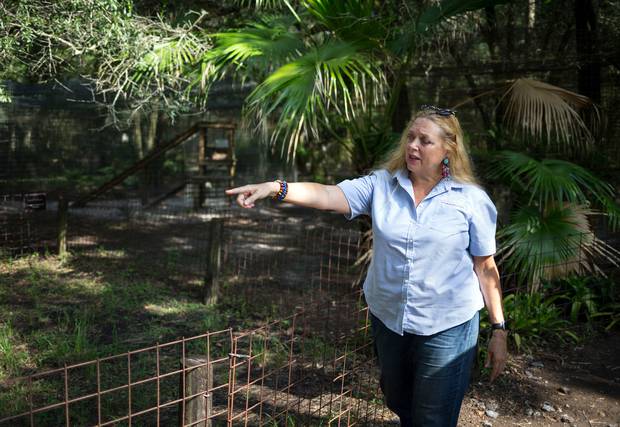 Following the documentary, Carole is looking to clear her name on Dancing with the Stars, where she hopes to prove she "needed" the documentary in order to further her activism.

"No matter how horrible something may seem, there is something that I may not see that is right on the other side that is going to prove that this is what I needed in order to get to this next place."