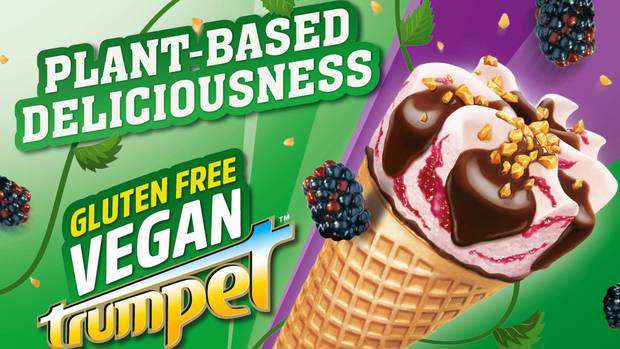 Kiwis who have problems eating ice cream because of diet requirements are in luck this summer, as Tip Top is launching a gluten-free, vegan Trumpet.

A plant-based and gluten-free version of the frozen treat will be coming to supermarkets, dairies and petrol stations on November 4.

However, the new Trumpets, which cater for coeliac, vegan, egg-free and dairy-free consumers, have already been spotted in some South Island stores.

The New Zealand ice cream brand confirmed the new addition to the Trumpet family on Facebook.

A Tip Top spokesperson said the allergy-friendly alternative would only be available in boysenberry for the foreseeable future, as they gauge the popularity of the frozen treat.

The base of the ice cream will be made from coconut oil, with dairy-free chocolate and boysenberries from Nelson.

"We have been observing lifestyle and food trends globally and in New Zealand, and saw there was an opportunity for a vegan and gluten-free Trumpet," the spokesperson said.

"With 17 per cent of New Zealanders choosing to completely eliminate or avoid eating dairy and 14 per cent of Kiwis who don't eat gluten, we wanted to cater for this segment of the market with an iconic Tip Top product this summer."

Since launching in 1964, Trumpets have been Tip Top's best-seller, with the chocolate flavour being the favourite.