Footage inside the Royal Caribbean cruise ship that ran into high winds and rough seas in the Atlantic Ocean last year has emerged.

The terrifying video shows a passenger looking out the window as 9m waves submerged the ship during the hurricane force storm.

The ship, carrying more than 4500 guests and 1600 crew members, was heading to Port Canaveral in Florida but was forced to turn back and return to New Jersey due to the rough weather, reports the Daily Mail.

It forced frightened passengers into their cabins overnight as their belongings flew about, waves rose as high as 9 metres, and winds howled outside.

In the video that surfaced on Reddit, a passenger is seen leaning against the window saying, "we're just staying in one place, hoping not to die." 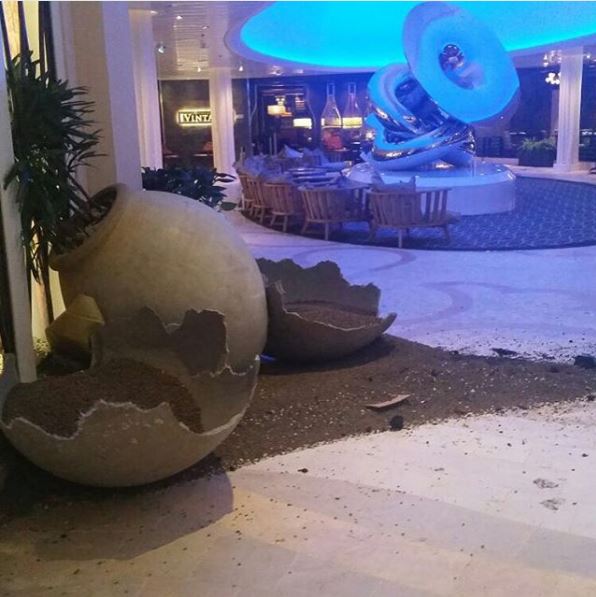 Damage from inside the ship. Photo / Instagram / Leanna Nicole

Four passengers were injured in the storm and the ship was damaged in some of its public areas.

Hurricane-like conditions caused items inside the ship to fly off shelves and smash into one another as the vessel leaned at least 45 degrees off centre in the swells.

This was as of 7a this morning. All water from the pools is gone. Tons of broken glass. Very surreal experience. #anthemoftheseas

The cruise line provided a full refund to passengers, as well as a discount for a future cruise.

The trip was originally supposed to be a week-long round-trip from New Jersey to Florida and the Bahamas, but the hurricane-force storm cut the holiday short.

The National Weather Service's Ocean Prediction Centre had issued an alert for a strong storm four days in advance and questions were raised as to why the cruise ship travelled through the treacherous conditions.

Royal Caribbean said the ship experienced "extreme wind and sea conditions" that were not expected.

However, it apologised to passengers following the February 7 2016 incident, saying "we have to do better".

But in September that year, Anthem of the Seas was caught up in another extreme storm.

Terrifying footage showed the 1,100ft-long Anthem of the Seas undulating through huge swells and 145km/h winds en route to Bermuda as it encountered the tropical storm Hermine.