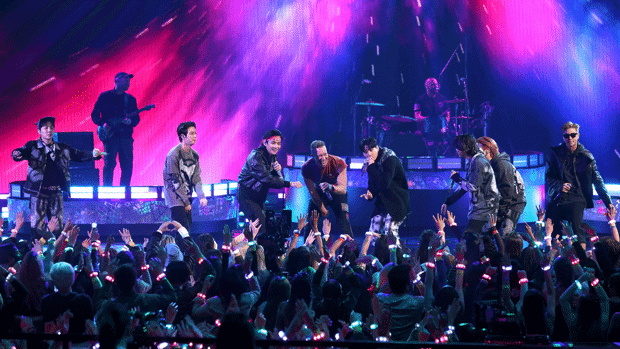 BTS, Megan Thee Stallion and Doja Cat were among the big winners at the American Music Awards.

The K-Pop septet scooped three prizes at the Cardi B-hosted ceremony at the Microsoft Theater in Los Angeles, including the biggest accolade of the night, Artist of the Year.

For Artist Of The Year, the My Universe hitmakers - who performed the hit song with Coldplay - beat off stiff competition from Ariana Grande, Drake, Olivia Rodrigo, Taylor Swift, and The Weeknd.

RM recalled how nervous they were making their AMAs debut in 2017 and dedicated the win to their loyal ARMY.

He said during their speech for the award at the fan-voted bash: "Four years ago, we had our first ever TV live performance on this stage, AMAs, it was DNA. We were too excited and nervous at the time and it’s been a long and amazing ride since then, but nobody could have ever bet on the awesome [honour] of standing here and receiving this award – except you, ARMY.

He continued: "Seven boys from Korea united by a love for music met the love and support from all the ARMYs all over the world. This whole thing is a miracle. Seriously, we’ll never take this for granted. Thank you so much."

Megan, who pulled out of performing due to an "unexpected personal issue", also won three awards for Favorite Trending Song for Body, Favourite Female Artist (Hip-Hop) and Favorite Album with Good News (Hip-Hop).

While she was not in attendance, the WAP hitmaker took to Instagram to thank her Hotties.

She wrote: "Thank you hotties thank you @amas I’m so happy so proud! I couldn’t be there physically this year but like I said I’m so excited for everything to come next year."

Doja also claimed three gongs for Collaboration of the Year for Kiss Me More with SZA, plus Favorite Female Artist (R&B) and Favorite Album (R&B) with Planet Her.

He said in his speech: "I want to accept this for all the aspiring musicians, the one who desires to play an instrument, wants to rap, wants to sing – not just the rock artists, but all the artists."

Taylor - who broke the record for the most AMA wins - scooped two awards for Favourite Female Artist (Pop) and Favorite Album (Pop) for Evermore.

And Ed Sheeran took home the male version of the same award.

Despite leading the nominations, Olivia Rodrigo went home with a single prize for New Artist of the Year.

Drake was named Favorite Male Artist in the Hip-Hop category, and The Weeknd nabbed the same title for R&B.

Standout performances included BTS, who gave the live debut of My Universe with Coldplay before closing the show with Butter.

New Edition and New Kids On The Block took fans back to the 80s and 90s with a medley of hits.

Silk Sonic (Bruno Mars and Anderson Paak) opened with a red-hot rendition of Smokin' Out the Window.

And Olivia Rodrigo gave her debut performance with a stripped-back version of Traitor.

An abridged list of the American Music Awards 2021 winners:

Artist of the Year:

New Artist of the Year:

Collaboration of the Year: