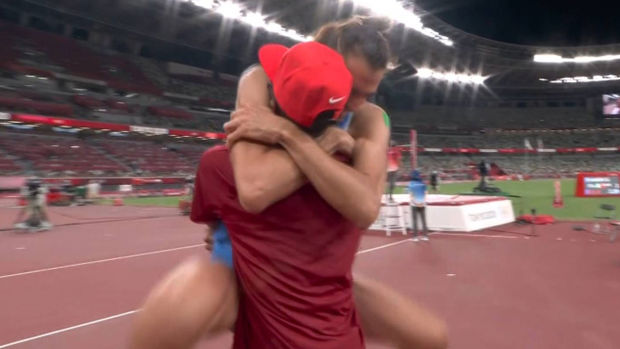 Kiwi high jumper Hamish Kerr has given a strong account in his Olympic Games debut, jumping 1cm below his personal best to finish 10th in a competition that will be remembered for its unique ending.

In a rare turn of events, Qatari star Mutaz Essa Barshim and Italian Gianmarco Tamberi shared the gold medal, clearing a height of 2.37m. Neither of the two had failed a jump until the bar was raised to 2.39m, where neither athlete was able to clear it.

While it was expected the two would go into a jump-off because their ledger was identical, they instead decided to share the top prize.

It was a heartwarming moment and fans around the world were enamoured by the Olympic spirit shown.

I love this Olympic moment.

No one can beat them and they couldn’t beat each other so Qatar's Mutaz Essa Barshim, and Italy's Gianmarco Tamberi decide to share the men's high jump gold.
pic.twitter.com/1yYMEHpoMV

As for Kerr, he had his struggles across five heights, twice being on his final attempt before ultimately bowing out at 2.33m. In the high jump competition, athletes are eliminated after three failed attempts in a row. If they fail twice then clear a height, they move on and get three attempts at the next height.

Kerr had no trouble clearing heights of 2.19m and 2.24m, but had his first slip up at 2.27m. A height he had cleared in the past, Kerr needed another two attempts to clear the height, but was able to progress.

Two athletes & friends decide to share the gold medal in the @Olympics high jump rather than jump off against each other!! Sporting respect of the highest order at the highest level 👍👏

wow. high jump ends in a tie as Barshim and Tamberi agree to not compete in a jump-off. pic.twitter.com/gQrTlzjRJC

This must be one of the best Olympics ever for personal stories - Gianmarco Tamberi and Mutaz Essa are tied for first in the men’s high jump. “Can there be two golds?” Essa asks an official. After a nod, they agree to share the win. Lovely scenes as they hug & celebrate.

It was a similar story at 2.30m - 1cm below his personal best - where Kerr twice took the bar with him before the round was delayed due to the women's shot put medal ceremony - which saw Dame Valerie Adams receive the bronze she won earlier in the day.

The break seemed to give Kerr a chance to reset, and he launched himself clear over the bar to move on to the next height.

Moving up to 2.33m, a height he had never previously cleared, Kerr was unable to better his personal best height – missing all three of his attempts.

Belarusian Maksim Nedasekau claimed the bronze medal, again on a countback of misses. While he also cleared 2.37m, Nedasekau had more failed attempts than Barshim and Tamberi and finished in third place.

How Hamish Kerr performed in the high jump final