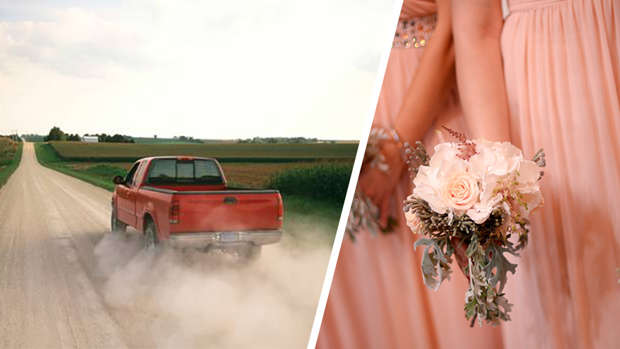 A boyfriend has made a runner at a wedding where his partner managed to catch the wedding bouquet.

The girlfriend, Haley Marie Skipworth, posted the hilarious moment in a video on Facebook as her boyfriend, Nathan Jordan, flees the wedding seconds after she caught the bouquet.

Jordan can be seen running extremely fast towards his ute and speeding off out of the carpark.

Skipworth posted on Facebook saying: "When my boyfriend, Nathan, saw that I did, in fact, catch it, he decided to make a run for it, jumping over every obstacle in his way and leaving nothing but dust as he sped down the road."

"Some say he ran out of there as fast as he could because he wasn't ready to tie the knot. Others say he ran to buy a ring."

"In reality, he did return right away. We have been dating for five years and plan to get married after college."

The video went viral on Facebook where one friend of Skipworth said: "She better get a big ring after this one."