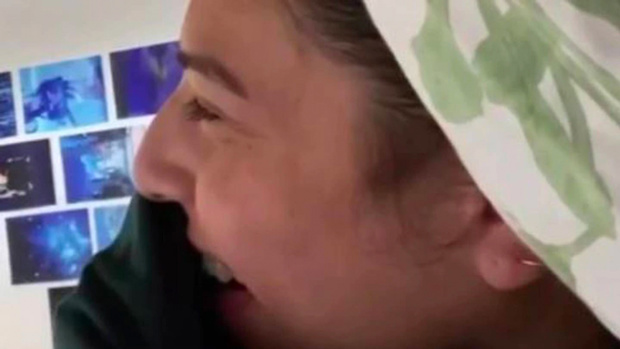 A Sydney woman was left in a fit of laughter after overhearing a cheeky conversation between two tradies working outside her bedroom window.

The student posted the comical video showing herself laying in bed giggling as she listened in on their chat.

In a clip posted to TikTok, the woman named Cat is seen laughing as the men talked on the scaffolding outside her uni accommodation.

The men can be heard talking about how they should tackle the job, and one cheekily says: "Give it to me Daddy."

The other man comments: "That's someone's bedroom right here, they're probably listening like what the f**k is going on."

Cat is seen trying to muffle her laughter with her duvet to make sure she's not caught listening in.

The video was captioned: "I couldn't even laugh out loud 'cause my window was half-open … I had to stay silent."

the way i couldn't even laugh out loud bcos my window was half open.. i had to stay silent 💀 ##sydney ##sydneylockdown2021 ##tradiesatwork

She revealed she started recording as she found their conversation funny and hoped to catch a particularly humorous part.

She then managed to catch the perfect moment of banter.

Viewers couldn't help but share their own stories or suggestions for what Cat should have done next.

"I had tradies next door and they had to take down the fence at my bedroom window and they kept pulling each other's pants down," one person commented.

Another added: "Aussie trades should have their own TV show."

A third said: "I would have been like 'DADDY GIVE IT TO HIM' then ran off."