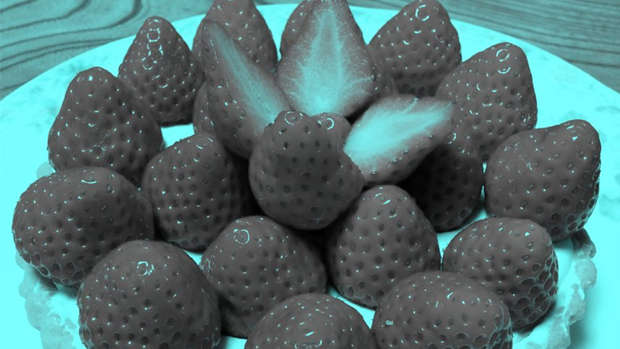 If you are seeing red, your mind is playing tricks on you.

The image shared on Twitter by Japanese 'experimental psychologist' and Professor of Psychology, Akiyoshi Kitaoka, appears to show a bunch of red strawberries on a tart - and seems to be filtered with a blue hue.

Strawberries appear to be reddish, though the pixels are not. pic.twitter.com/Ginyhf61F7

But in reality, there is not a single red pixel in the picture.

These strawberries are actually grey with a hint of green.

The picture is an optical illusion, demonstrating colour constancy – whereby your brain is trying to rationalise the image.

Expert on visual perception from the National Eye Institute, Bevil Conway, described the baffling image as an example of the brain 'colour correcting the world' when it is filtered through a different light.

Twitter users proved that there was no red in the image by isolating some of the colours that appeared red and put them on a white background...

@social_brains I isolated a few of the colors that appear most "red" in the strawberries and put them on the white background to the right. pic.twitter.com/GJJ9PJqNxt

As a result, only shades of grey and green were visible.