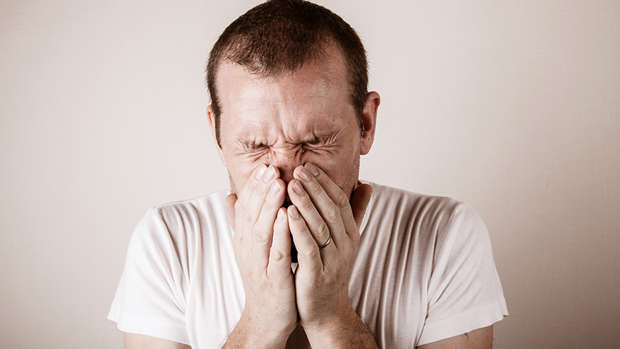 We're all guilty of doing this!

You know the feeling... when your nose gets that familiar prickling sensation.

But instead of letting that sneeze out we quickly clamp our mouth shut and pinch our nose close with our hand...

Well apparently we should stop doing that.

According to an article published in BMJ Case Reports, the man was left almost completely unable to speak or swallow due to a ruptured pharynx, and had to spend two weeks in the hospital due to his resulting injury.

While this kind of injury is extremely rare, his doctors warn holding back a sneeze can cause other medical problems like ruptured eardrums, popped blood vessels or it could even burst a brain aneurysm.

"Halting sneezing via blocking nostrils and mouth is a dangerous manoeuvre, and should be avoided," the doctors wrote in the case study.

Erich Voigt, a clinical associate professor in the department of otolaryngology told Men’s Health magazine: “If you keep the mouth or nose closed, the generated pressure will back up into your head (sinuses), nasal cavity, or down the throat back into the chest."

"Suppressing the sneeze by holding the nose or mouth leads to a noticeable increase in pressure, about 5 to 24 times of that during a normal sneeze.”

So remember the golden rule: It's better out than in!