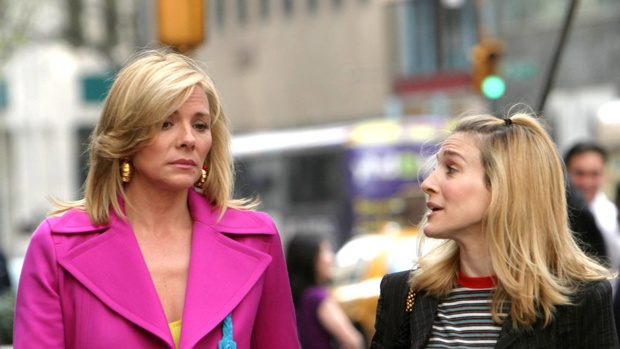 WARNING: This article contains reported spoilers for the Sex and The City reboot And Just Like That...

If you want to wait and watch for yourself, And Just Like That... screens on Neon and Sky Go Fridays from December 10, and Mondays at 9.30pm from December 20 on SoHo.

Sex and the City character Samantha Jones has been moved to London for the show's reboot.

Kim Cattrall, 65, who plays the character, ruled out reprising her role for the HBO reboot, And Just Like That..., and to get around that the PR maverick is said to have ventured across the pond and is now a resident in England after falling out with Carrie Bradshaw, who is played by actress Sarah Jessica Parker, 56.

A source told Mail Online: "We couldn't have Samantha roaming around New York City and not have the other women (Charlotte and Miranda) not interacting with her. It just wouldn't have made sense."

This comes after it was reported Samantha’s absence would be explained by a rift between the group.

It is thought that producers ruled out sending her back to LA - as this was already done in the first of the two spin-off movies - and so they opted to send her to a place less famed for its sunshine, but somewhere Samantha will still be "thriving".

The source continued: "Sending her to Los Angeles wasn't an option as we'd done that in the first movie, so having her character based in London really was the perfect way to keep her alive and explain her absence ... viewers will learn that she is thriving in England even though she has fallen out with Carrie."

In the new show, which debuts in December, it's said that Carrie will attempt to retrieve her estranged pal back from across the Atlantic as she - out the remaining trio of Miranda Hobbes (Cynthia Nixon, 55), and Charlotte York (Kristin Davis, 56) - is having a "tough time" without Sam.

The source claimed: "Carrie is the one who has the tough time without Samantha and by the end of And Just Like That you'll see Carrie extend the olive branch and try and rekindle the friendship."

Away from the screen, Kim - who was born in Liverpool, North West England - has been locked in a feud with Sarah Jessica for some time.

In 2017, Kim said she has "never been friends" with her co-star, before later insisting the actress "could have been nicer" on the set of the popular TV show.

She said at the time: "We’ve never been friends. We’ve been colleagues and, in some ways, it’s a very healthy place to be."

The Filthy Rich star then said she didn’t know what Sarah Jessica’s "problem" was, before later slamming her as "toxic" and "cruel".

But in 2018, Sarah insisted there was "no catfight" between her and Kim.

She said: "I’d just like to remind everybody that there is no catfight.

"I have never uttered an unkind, unsupportive, unfriendly word, so I would love to redefine it.

"I also want to remind everybody that there were four women on the set and I spent equal time with all of them, so this was not a set with two women who didn’t get along.

"I’ve always held Kim’s work in high regard and always appreciative of her contributions."