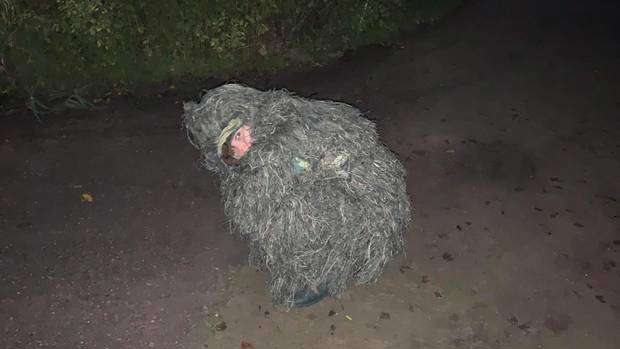 A woman from Wisconsin dressed up in camouflage clothing to capture her sister's proposal on camera.

Therese Merkel went the extra mile for her big sister as she wanted to capture the special moment but didn't want to be seen so she dressed up in a ghillie suit which is commonly used for a sniper to disappear into their surroundings.

Taking to Twitter the 23-year-old shared hilarious pictures of herself dressed in the ghillie suit as she snapped the proposal.

The photographs went viral among social media users as other families share and comment on the tweet in the hope to find a sister as devoted as Merkel.

According to Popsugar, Merkel had been helping her sister's fiance, Andrew Philibeck, plan the proposal at a well-known trail in Madison, Wisconsin. She had joked that she would go undercover to capture the moment, but Philebeck loved the idea and ordered her a ghillie suit online.

Sister got engaged this weekend and I dressed as a bush in the wilderness to watch/capture the moment. We are 1 yr apart.. why are our lives so different rofl pic.twitter.com/cE14RBZ9CL

"While I was hiding, I had the perfect view of the whole thing. Andrew knew I was hiding and wasn't even sure I was there when he walked down — that's how baller this suit was," Merkel told Popsugar.

Much to the relief of the effort that had gone into the proposal, Merkel's sister Rachel said yes.

Merkel revealed herself screaming: "She said yes", she told Popsugar.

"Rachel was very confused and I was legit crying tears of joy because of how special the whole event was."

Many Twitter users have replied to the undercover proposal in awe.

"You're my hero," one user tweeted.

"I like it cause it's sweet but also creepy which is kind of my jam," another replied.