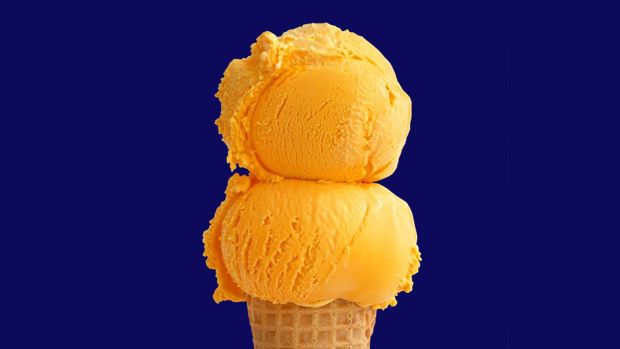 Ever wondered what a bright orange cheesy ice cream would taste like? Well, today is your lucky day.

New York ice creamery Van Leeuwen and Kraft have unveiled a new flavour perfect for the very small demographic of people who have eaten mac and cheese and wondered what it would taste like as a creamy frozen dessert.

The limited-edition macaroni and cheese-flavoured ice cream has left many asking the companies why.

The companies described the ice cream as a "cool, creamy scoop of ice cream that brings that comforting, nostalgic feeling from a warm bowl of Kraft Macaroni & Cheese."

The cheesy ice cream looks like it will only be available in the United States - a fact we're not too mad about.

The Takeout's Marnie Shure and Lillian Stone wrote that they were "surprised, and maybe even a little annoyed" to share that the ice cream was good.

"I'm getting a teeny, teeny aftertaste, but it's not like I just ate a bowl of mac and cheese," Stone wrote. "It truly tastes like cheesecake to me."

"The cheese powder combines with Van Leeuwen's rich base, made with milk, cream, and sugar, to produce a buttery flavour that's only slightly cheesy," wrote McCarthy.

"It's one of those foods that's so uniquely compelling that you're going to be confused while eating it, but definitely won't want to stop."

Why am I imagining the Kraft Mac and cheese ice cream as queso ice cream with pasta sprinkled on top? That can't be right, can it???

The flavour announcement left many social media users to question whether the new culinary collaboration was a joke or not.

"It's not even April fools," one Instagram user wrote.

"I'll give that a hard pasta," said another.

A lot has happened this year and it’s like whatever keep moving, BUT I draw the line at Kraft dinner making Mac and cheese flavoured ice cream! This year is officially ruined.

"Just bc [because] we can do not mean we should," another wrote.

"This feels illegal," joked another.

This isn't the first time Kraft has released unusual flavours. For Valentine's Day the brand came out with a hot pink, candy-flavoured mac and cheese. Back in 2020 the brand released a pumpkin spice macaroni and cheese that was made with cinnamon, nutmeg, allspice and ginger.