Twitter went into a bit of a meltdown after guest Gemma appeared on The Jeremy Kyle Show. She was branded by trolls as "tooth woman".

She was involved in the episode "Stop harassing me just because I’m sleeping with your ex".

Gemma faced a load of online abuse, which she claims led to her having a breakdown:

"After the show my teeth caused a social media meltdown. The abuse was terrible, I just wanted to cry. I actually had a breakdown."

As she explains in the episode, her teeth are like that due to a fall she had when she was younger.

BUT one dramatic makeover later, Gemma looks quite different. The Jeremy Kyle Show spent £10,000 to sort her out some new teeth.

To be fair it was partly the shows fault she was abused in the first place so it was sort of the least they could do. 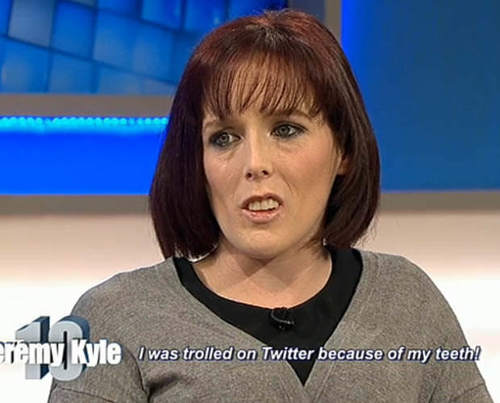 Fans of the show were quick to praise Gemma’s new look:

I don't care what people say, #JeremyKyle is great! So pleased to see Gemma happy with her new teeth!