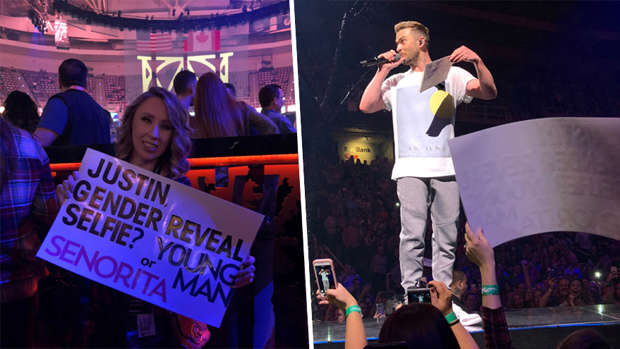 Getting him to do your baby's gender reveal in the middle of the show? Priceless.

Yep, one lucky fan managed to enlist the former *NSYNC singer to help reveal the sex of her baby.

At his New York concert last week, Justin - who is dad to son Silas with wife Jessica Biel - fulfilled the wish of the mum-to-be, even stopping his entire show to announce the gender.

Before heading to the gig, Maddie Petrino made a large poster that asked the pop star a simple question: "Justin, gender reveal selfie? Young man or Senorita."

"I noticed that Justin is pretty interactive with his audience," the 31-year-old said, adding that "he’s been known for taking selfies with fans at his concerts and the Super Bowl."

WATCH MORE:
• *NSYNC star Justin Timberlake reveals he once 'hooked up' with a Spice Girl
• Ed Sheeran joins Bruno Mars on stage for surprise duet of 'Thinking Out Loud' - and it is AMAZING!

"I thought why not try to get a picture with Justin holding up my sign that says "it's a girl" once I caught his attention."

"I completely didn't think he would stop the entire show to announce to the whole audience my gender reveal."

But, that's exactly what the star did.

"It’s a girl!!! Thank you so much @justintimberlake for helping me announce. I had the most amazing night," she wrote alongside a video of the moment.

Maddie says she is now trying to convince her husband to give the baby the middle name Justine.

Either way, we're sure this is a story she will definitely tell her daughter one day!