Working mothers do a great job balancing their careers and looking after their children - and news anchors are no exception.

NBC Anchor Courtney Kube, national security correspondent for NBC news was midway through a report about the Turkish airstrikes in Syria when her child in a bright yellow shirt made an adorable cameo.

"Excuse me, my kids are here," she said, before the broadcast cut to a map relating to the story. 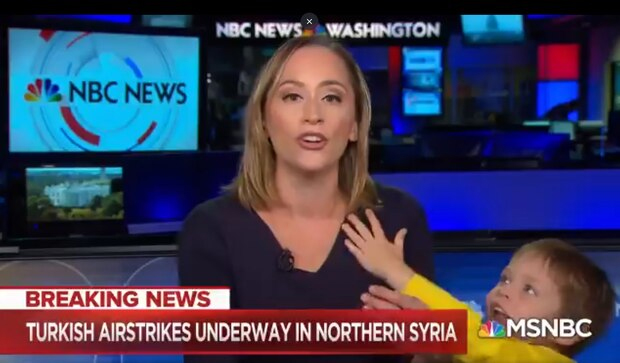 Kube flawlessly completed her report despite the distraction.

The cameo received a lot of positive feedback on Twitter, including messages of support from a weather anchor who found himself in the same conundrum during a weather report.

Another user wrote: "Perfectly handled. Smiling....loving....and didn't miss a beat on her reporting."

The live broadcast conundrum drew comparisons to a 2017 BBC News broadcast when Professor Robert Kelly was interrupted by his children giving a live interview about South Korea.

His child was also wearing a yellow shirt.

That yellow shirt reminds me of someone else’s TV moment.