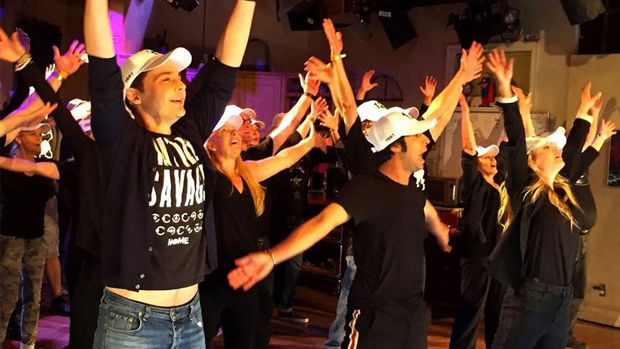 As we prepare to say goodbye to The Big Bang Theory, the cast and crew danced it out for us one last time.

The CBS comedy has a history of surprising the studio audience with dance performances over the years and series star Kaley Cuoco made sure fans all around the world saw their final performance.

Ok 🎶 here it is! I give you (from many different angles!) our FINAL @bigbangtheory_cbs epic flash mob! Our cast and crew surprised the writers, producers, and audience last night dancing to @backstreetboys Larger than Life (a song that thanks the fans) thank you @bricuoco @mandykorpinen @elizabethpetrin for choreographing this epic dance and for my crew who rehearsed for months and listened to me yap on and on about this endlessly! 🤪 it was worth it!💃🏼 enjoy!!! #thefinalseason (PS @sanctionedjohnnygalecki hurt his ankle but he was cheering us on from the sides!)

Johnny Galecki had an ankle injury, so had to cheer the cast and crew on from the sidelines.

Donning hats emblazoned with the number 12 (to mark the number of seasons The Big Bang Theory has been on the air) rocked out to the Backstreet Boys’ 'Larger Than Life.'

We think it was the perfect song to sum up the show!