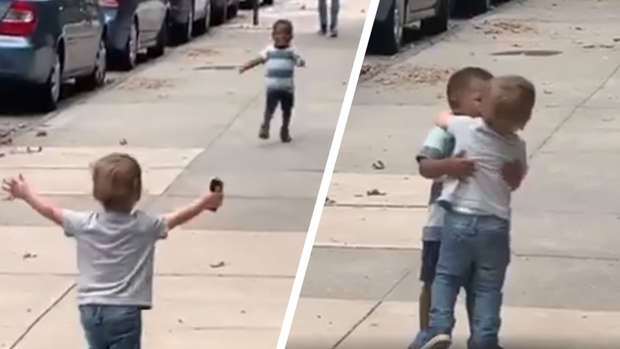 Two adorable toddlers have melted the heart of the internet.

After being apart for TWO WHOLE DAYS, Maxwell and his best friend Finnegan were finally reunited.

Video of them running towards each other and embracing has gone viral after Maxwell’s doting father Michael Cisneros shared the clip to social media.

Seriously, the video will make you audibly "aww".

"When they are away from each other, they are always asking about one another,” Michael told ABC News. “They go to music class together, Dana Banana (a weekly music event) and they love to dance - both are excellent dancers.”

In another video the two inseparable partners in crime can be seen holding hands as they pose for a photo.

"They just took off toward each other and I just got my phone out as quickly as possible, and just tried to record it," the proud father told WPIX-TV. "They are just too cute together. Definitely not staged, and it was just a lucky moment and I got it on camera. Now with all the attention, it's getting, it’s just gonna be a great story to tell him when he's older.

“There's not anyone else that comes close to Finnegan's status in Maxwell's eyes,” the dad added. "It's great to spread the love and to show people that kind of love and beauty in the world."