Last night on The Chase, host Bradley Walsh got way more than he bargained for when the show's oldest contestant ever gave him an unexpected run for his money.

Right from the off, Great Grandma Jean's sass levels were off the charts when Brad asked her "Alright Jean, are you ready?" and she responded, "do I have to be?"

She later told Brad she was 91 and a half - "you can't forget the half" - earning her the title of oldest contestant on The Chase, and a chance to share some stories.

Brad asked her what the most extraordinary moment of her life has been, and she whipped out a cracker story about lunching with Elizabeth Taylor's fifth husband, John Warner - "terribly posh".

And when asked what she would do with her share of the prize money should the team win, she slayed again, explaining that she'd like to take her great-grandchildren to Disneyland Paris, "and if there's any leftover I'll have some botox". 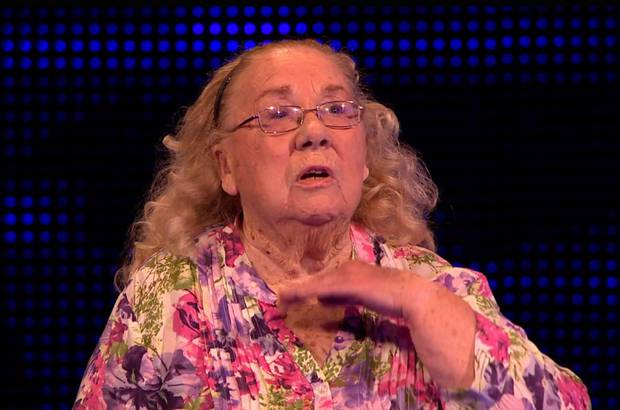 Later, she shut Brad down altogether, cutting him off while he was attempting to crack some jokes of his own by saying, "Right we'd better get on with the show".

She then informed him: "I could do your job at a pinch you know that don't you? You can be replaced."

Unfortunately, Jean could not outrun the Chaser and was sent home empty-handed, but when Brad asked if she'd at least had a good time, she replied: "Oh yeah! It's been fun".

Perhaps we'll see her back as a co-host one day.