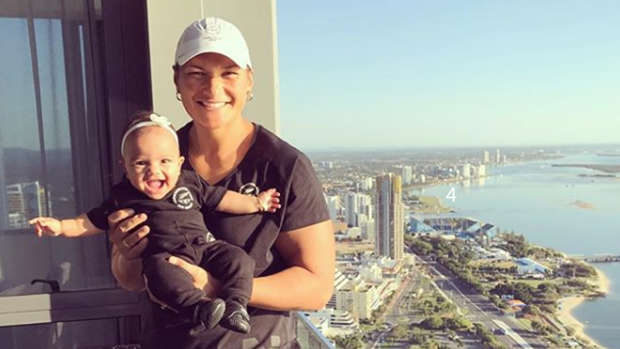 Dame Valerie Adams has spoken for the first time about her struggles with infertility.

"I think people underestimate just how hard fertility is," she told TV3's The Project.

"I guess some women take it for granted. Our wants were there, but nothing was happening," she said of how she and her husband Gabriel Price struggled to conceive after the 2016 Rio Olympics.

They were finally successful having daughter Kimoana in October last year.

"The first cycle, I only managed to produce one egg, and then the two-week wait. That's horrible. On D-Day I woke up and sure enough, I had my period. It's like mourning a death of something that never existed.

"At that very moment all I thought about was we didn't get lucky - we've just flushed $13,000 down the toilet for this one moment, this one chance to have a child and a family.

"I also had other issues going on. They test this hormone, and this is getting real personal, which means I'm going to [go through] menopause by the time I'm 43."

That made her realise how little fertility was discussed, she told The Project.

"It's one of those things that you just never think of - you think 'Oh that's not going to happen to me'. I know so many people struggle with it, and so many people are probably going through it but not able to seek help, they don't know where to go.

"I wish they would go and get some help, talk to their GP about it. Because at the end of the day, when our first cycle didn't work, it took me a week and then I said 'Hey, what now? What are we going to do'?"

She said she had always wanted to be a mum but it took more than one positive test to convince her she was pregnant.

"I had the little pregnancy test they give you, they gave me about eight, so I did all eight, had them all in a row. I didn't believe what I was seeing, so I got the blood test and they went, 'Congratulations, you guys are pregnant'. I just cried and cried and cried. It was very exciting."

Now everything had changed for the couple.

"[Kimoana] is the apple of my eye, really. She's such a miracle - she's a great baby, great traveller."

And she had an important message for her fellow Pacific Islanders who may be struggling with their own fertility issues.

"Gabe's parents didn't know what route we took until Kimoana was born. But when we did tell them, they were so supportive and open. But unfortunately that's not the norm in our Pacific community."

She told The Project she wanted to see a cultural shift in how infertility was talked about.

"For some people it's not so easy to pop out a child just like that. So what do you do? You go and get help, you go and get tested, you see what's wrong with you.

"I also want to make it my mission to educate and give our people the knowledge and the tools that they need to go and seek help. They're so afraid and so shamed, it's a subject that's so taboo and not talked about. I think we shouldn't be whakamā to talk about it. You are not alone."

She hopes to inspire and educate people to get the help they need.