Achievement rates based on the 2016 NCEA results have now been released.

How did your school rate?

Click here for a table that shows 'percentage of participating students who achieved this qualification by the end of the academic year of interest'. Kristin School in Albany and John McGlashan College in Dunedin joined four other private schools in the latest data with 100 per cent Level 2 pass rates in Year 12.

King's College was the bottom-ranked decile 10 school, with a pass rate of 84.5 per cent at Level 2 in Year 12. Cambridge International Examinations manager Roger Franklin-Smith said that was because most King's students sat Cambridge exams, not NCEA. The biggest change was at the small Rudolf Steiner School in Christchurch, with just 21 students in Year 12 last year, where the Level 2 Year 12 pass rate fell from 94 per cent to 67 per cent. Catholic schools made up three of the top four decile 7 schools. Bottom-ranked in both Years 11 and 12 was Ao Tawhiti Unlimited Discovery in Christchurch which says learners "are encouraged to be creative, innovative and take risks". Glenfield College on Auckland's North Shore jumped into the top five decile-7 schools. Its Level 2 pass rate in Year 12 rose from 81 per cent to 95 per cent. Five decile 5 schools achieved 100 per cent pass rates for their Year 12 students in NCEA level 2. Nathan Durie, who leads Manukura in Palmerston North, said his school gave its 185 mainly Māori students "a sense of themselves, of confidence".

"They haven't learnt that they are dumb," he said. "The hardest part to overcome is the learnt 'dumbness'.'" Otamatea High School at Maungaturoto registered the biggest gains in decile 4, with pass rates for students attempting Level 2 in Year 12 up from 64 per cent in 2015 to 91 per cent. Ngata Memorial College performed much better at Levels 2 and 3 than at Level 1. Its Level 2 pass rate in Year 12 was 92.3 per cent, just missing out on the top five schools for the decile. 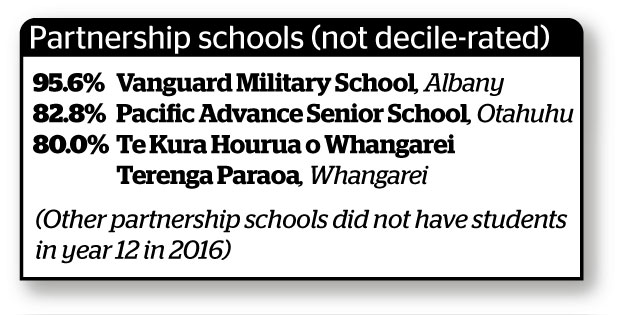 - This article originally appeaed in the NZ Herald and was republished here with permission.